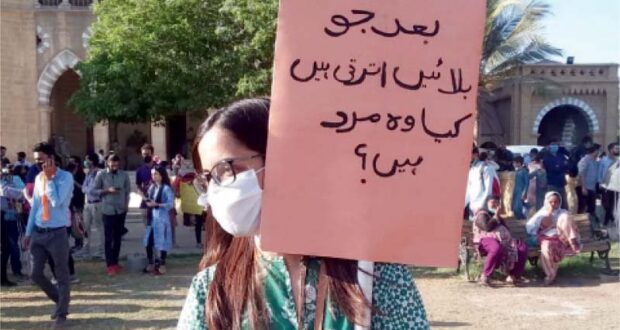 Hundreds gather at Frere Hall to rally for women’s rights

KARACHI: “Maghrib ke baad jo balayein utarti hain, kya woh mard hain [Are the ghosts that descend after sunset men]?” read a placard at the Aurat March on Monday. Squinting as the sun blazed over the Frere Hall gardens, where over a thousand women and allies had gathered on International Women’s Day, Fatima Farooqui explained why she chose these words while making her placard.

“I am told time and again that it is not safe to step out after sunset,” she said. “But nobody wants to talk about what it is that makes the outside world unsafe for women.”

Having lived in a man’s world since existence, women from all walks of life once again took to the streets on March 8, to demand of state and society to grant rights already affirmed by the country – on paper at least – and religion.

The very controversial ‘Aurat March’ has been the talk of the town since 2018, when it happened for the first time. A few slogans and posters made waves and sparked debates. Except, more often than not, the conversation would derail and centre on the slogans and language adopted by the participant while the real message behind the march – that women are robbed of rights granted to them by the Constitution of Pakistan – would be ignored.

This year, the organisers arranged a walk and a sit-in at Frere Hall, presenting a 15-point agenda for the provincial and federal governments. This year, the marchers put forth a deadline for their demands to be accepted so that the struggle to secure women’s rights could be taken a step forward.

Over 1,000 women, including students, house-wives, working women, social workers and women from varying socio-economic classes, marched towards Shar-e-Faisal from Frere Hall, where they sat on the road to stage a symbolic sit-in.

A set of demands

Elaborating on Aurat March 2021’s theme and plans, one of the organisers, Qurat Mirza, told The Express Tribune that this year the protest revolved around the patriarchal violence women face and how the situation exacerbated during the pandemic. “It has been reported that violence has increased during the pandemic.”

Mirza said that after the sit-in they will take the path of the press to announce further plans if the government did not respond well to their demands.

Elaborating on why the sit-in this year, Tehrik-e-Niswan founder and Aurat March organiser, Sheema Kermani, said that they have been raising their voice for four years now but it appeared that no one was listening.

So this year, she said, they decided to stage a sit-in. Kermani added that if their demands are not heard soon, they will stage several sit-ins and protests.

“One of the most important point [raised] is to build shelter homes for women, who are thrown out of their houses by their husbands, or those who are not accepted by their fathers after they walk out of failed or abusive marriages,” said Kermani, elaborating on the demands put forth in the 15-point agenda.

“Such shelter [homes] are needed in each district as cases of forced marriages are also very common. Darul Aman is the only place for women, who do not have a place to live and it can be over populated,” added Kermani.

The key idea most of the organisers focused on was the economic independence of women so that they can fend for themselves if their fathers or husbands abandoned them. Besides, the agenda also includes, equal wages, separate toilets in offices and public places and end to forced conversion and harassment of women.

However, the organisers of the march appeared unclear as to their future course of action. They could not give an exact timeline for their course of action if the government fails to respond positively to their 15-point agenda.

While Mirza and Kermani did not give a date for their next protest, another organiser, Soha Tanvir Khan, said that they would protest again in three months if their demands are not heeded.

‘The pandemic of patriarchy’

For many participants, the march has by now become an occasion of joy and solidarity as well as a platform to express their outrage at a system that they feel fails them often.

“Patriarchy, the pandemic that has long lasted,” read another placard. Its holder, Shahroze Suzuki, pointed out that there was a dire need to accept that patriarchy exists. “People are getting vaccinated for corona, they should also get themselves vaccinated against patriarchy,” he joked.

Another participant, Bhermi Kolhi, had come to Karachi from Badin along with six other women just to attend the Aurat March. “I came here along with my father, I am a social worker in Badin and I tirelessly work for women of my area who are tortured and deprived of their rights,” she said.

Kolhi, who has only completed her primary education, added that, “If people like us won’t raise our voice for minor girls who are abducted and forced into marriage under the name of conversion then the change won’t come”.

Aurat March is held every year on this day to highlight the struggles faced by women living here.