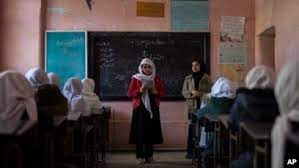 Posted by: admin in Women and Education August 3, 2022 Comments Off on Girls high school without teachers 76 Views

TOBA TEK SINGH: Villagers of a Kamalia tehsil Chak 746-GB say the only government girls high school of this village where girls of someone dozen area villages and localities are studying, has been functioning without required teachers.

Lumberdars of the village Ghulam Shabbir and Liaqat Ali, a former union council vice chairman Mazhar Iqbal, Dr Ahmad Ali and Iqbal Warraich told reporters as the school is situated in a far-flung area of Kamalia tehsil, the majority of female teachers are not willing to be appointed there.

This is the reason a number of teachers have got transferred from this to other schools in previous years and the last secondary teacher also got herself transferred in the summer vacations.

There are only four teachers, two each for primary and middle classes. They also said that the number of students had decreased from 400 to 300. They demanded that the deputy commissioner redress their complaint of shortage of teaching staff in the school.

School headmistress Shamshad said that out of four existing teachers, she had asked two of them to also teach students of class nine and 10 but they cannot teach computer, science and mathematics for them. She said she had sent a request to higher authorities to fill the teacher vacancies and hopefully soon new teachers will be appointed.

District Education Officer-secondary Mian Muhammad Tahir said a team of his department will soon visit the villages around this school to convince the parents to readmit their daughters in the school and to assure them that the staff shortage will soon be resolved.

District Education Authority CEO Razia Tabassam said she directed officials to immediately send alternate teachers to this school from such schools where the staff was surplus.