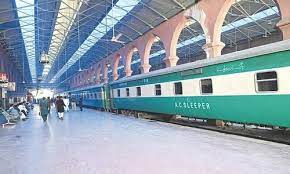 Posted by: admin in Gender Based Violence July 26, 2022 Comments Off on Five suspects indicted for raping woman in train 17 Views

A session’s court indicted five suspects for gang-raping a female passenger on the Bahauddin Zakaria Express, paving the way for the commencement of trial in the high-profile case.

In a shocking incident, the 25-year-old divorced woman, a mother of two children, was raped while she was travelling alone in the economy class of the Multan-Karachi train on the night between May 27 and 28. The incident happened when a ticket checker offered her a seat in the air-conditioned compartment, where, the ticket checker along with other train employees, subjected her to sexual abuse.

Four employees of the privately-run train — Muhammad Zahid, Aqib Munir, Muhammad Zohaib and Amir Raza – were charged with sexually abusing the woman, while another – Mohammad Hafeez – for aiding and abetting the crime and hiding the evidence.

Additional District and Sessions Judge (South) Ashraf Hussain read out the charges to the accused, who pleaded not guilty and opted to contest the case.

Three of them are in judicial custody and have been produced from prison while two others appeared in the court on bail.

The judge set August 1 as the next date of hearing when he will commence recording testimonies of prosecution witnesses against the accused persons. As many as 67 witnesses, including doctors, a judicial magistrate, train’s guards, other staffers and officials will testify during the trial.

Last month, a judicial magistrate accepted an investigation report filed by the investigating officer under Section 173 of the Criminal Procedure Code (CrPC).

According to the content of the charge sheet, the victim got on the train from Multan on the evening of May 27.

She travelled without a reserved seat or berth until Rohri and when the train departed from the Rohri railway station, a ticket-checker, Zahid, luring her with a seat and berth, took her to an air-conditioned compartment of the train, where Aqib, train manager, was already present. The two accused went out into the gallery and talked to each other for a while.

Zahid came back and locked the compartment from inside and began talking to the woman. “The AC [compartment] fare is too high,” he said. The woman, being penniless, begged him to allow her to complete her journey without paying additional money.

The accused slapped at her face and hurled death threats before subjecting her to sexual abuse. After he went out, accused Aqib and Zohaib, another ticket checker, raped her. Later, security guards, including accused Hafeez, shot a video of the victim so he could blackmail or take monetary benefits from his bosses by using it.

It was only after a local daily published a report about the alleged sexual abuse that the police contacted the woman and lodged an FIR on her complaint.

In light of circumstantial, forensic and medical evidence, as well as statements of the witnesses, the investigating officer, Habibullah Khattak, said it has been proved that Zahid lured the woman to the AC compartment where he along with Aqib and Zohaib raped her one after another. Their DNA samples had also matched with those of the victim, confirming their involvement in the heinous crime. Suspect Amir also visited the compartment in the woman’s presence but his involvement in the crime was yet to be proved as his DNA samples had been sent to a forensic lab in Lahore for testing, the IO pointed out.

He said suspect Hafiz should be tried for hushing up the crime by not informing the incident to the authorities concerned and making a video of the woman.

The IO said that the victim had also identified three of the accused during an identification parade before a judicial magistrate and recorded her statement under Section 164 (power to record statements and confessions) of the CrPC, narrating the ordeal.

An FIR was lodged under Sections 376 (punishment for rape) and 34 (common intention) of the Pakistan Penal Code at the city police station on the complaint of the victim.