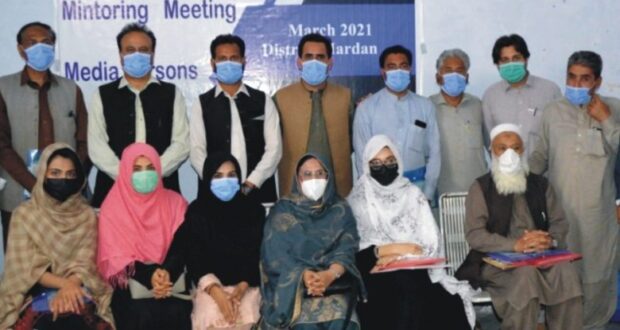 MARDAN: A seminar was organised by a non-governmental organisation, DCHD at the central office of the Awami National Party (ANP) in Mardan where male and female reporters were also invited.

The DCHD Coordinator Nusrat Ara said violence against women and harassment is not only a problem with Pakistan, but rest of the world also. She said perception and thinking must be changed for making the society as friendlier for women as it is for men. She said it is a pity that women are mostly blamed for all kinds of problems and such words are associated with them which are extremely inappropriate.

“Most incidents of violence against women go unreported as women are often ignorant about their rights,” she said.

Nusrat Ara said Islam gave women all rights 1,400 years ago, but still there are many families which even don’t give right to ancestral property and other basic rights to women. She lamented that most of the news items about women in media involve violence or torture and inappropriate words are used in it to create sensationalism.

“Due to low representation of women in media, women cannot get proper coverage in the media. There are many places where the intrusion of male reporter is considered inappropriate. Women can share their problems with women reporters in a better manner,” she said.

The programme coordinator said media should show responsible behaviour while disseminating news about women. “We must realise that women reporters are equal stakeholders in development of media,” she said.

Nusrat Ara said women reporters put light on issues like gender discrimination, honour killings, early marriages, domestic violence and dowry etc in a befitting manner because they could feel the pain of other women. She said there must be no discrimination between a man and woman in any field of life. She said gender discrimination will have to end in order to create a healthy society.

“We are working on the principle of providing equal opportunities to the youth to come forward and play role in development of the country,” he said.