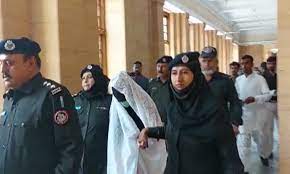 Posted by: admin in In Focus July 3, 2022 Comments Off on Dua Zehra brought to Karachi for age determination 25 Views

KARACHI: Police on Saturday brought Dua Zehra from Lahore and presented her before a special medical board constituted by the health department under the directions of court to determine her age.

Ms Zehra had gone missing in the Al-Falah area on April 16 and was recovered from Punjab on June 5 where she told the police that she had contracted a marriage with her free consent.

The first meeting of the special medical board comprising 10 experts/doctors from government hospitals and one from Aga Khan University Hospital was held earlier this week but she did not appear before it.

The board had asked the parents to provide relevant documents pertaining to her birth and school certificates.

On Saturday, when she was presented before the board, different tests were carried out at the Services Hospital Karachi. Different X-rays, blood samples, tooth X-ray, etc, were carried out.

The sources said the reports of these tests were expected to be received within three to four days and later on her age would likely to be determined.

Meanwhile, Jibran Nasir, lawyer and activist representing Dua Zehra’s father, Mehdi Ali Kazmi in the case, said that the medical report presented in Sindh High Court earlier was in ‘violation of standard practices and procedures’ because it was prepared by only one doctor.

In his social media comment, Mr Nasir said all offences in this case were age-specific. “As per law, during trial when considering evidence, a medical report cannot override documentary proof such as Nadra (National Database and Registration Authority) certificates, which have been issued prior to the date of crime.”

However, he contended since a ‘flawed’ medical report was produced in this case, it was imperative to challenge it.