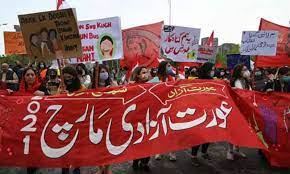 PESHAWAR: A local court on Friday ordered registration of an FIR against organisers of Aurat March held in Islamabad on a petition filed by five lawyers claiming that the participants of the march had passed anti-Islamic remarks and were carrying obscene posters.

Additional District and Sessions Judge Syed Shaukat Ali Shah accepted the petition filed by Ibrar Hussain, Israr Hussain and three other lawyers under Section 22-A of the Code of Criminal Procedure (CrPC), which empowers the court to act as ‘Justice of Peace’ and issue an appropriate order in case of non-registration of a criminal case by police.

“The contents of the petition constitute a cognisable offence. The local police is under legal obligation to register FIR of the occurrence as per the version of the petitioners,” the court ruled.

It directed the station house officer (SHO) of East Cantt police station of Peshawar to register an FIR of the occurrence as reported by the petitioners under the relevant law.

The judge directed the court staff to send copies of the petition and his order to the SHO for compliance.

Advocates Ajmal Mohmand and Gohar Saleem appeared in the court for the petitioners.

Over the query that since the march had taken place in Islamabad how could an FIR be registered in Peshawar, the petitioners’ lawyers said that the derogatory remarks and posters were watched by the petitioners on social media in Peshawar and under Section 179 of the CrPC the court had the jurisdiction to entertain the petition.

The lawyers argued that as the consequences of the Aurat March had ensued in Peshawar, the court was empowered to order registration of an FIR.

The court had reserved its order on the petition on March 24 after completion of arguments and pronounced it on Friday. The petitioners have stated that Aurat March was held in Islamabad and other cities of the country on the occasion of Inter­national Women’s Day on March 8.

They alleged that in Islamabad the participants of the march had uttered derogatory remarks against sacred personalities of Muslims besides displaying un-Islamic and obscene posters on the instructions of the organisers, which hurt the feelings and sentiments of the Muslims including the petitioners.

They stated that the government and administration in Islamabad had not taken any action against the organisers of the march. The petitioners claimed that they had approached the East Cantt police station’s SHO for registration of an FIR but he was reluctant to file one.

The SHO in his comments said that the petitioners had filed an application for registration of an FIR, but he had asked them to produce a video or any other material evidence so that legal process might be initiated.

The petitioners contended that a cognisable offence had taken place and it was the duty of the police to register an FIR.

The Khyber Pakhtunkhwa Bar Council had also passed two resolutions in its meeting on March 15, calling upon the government to take action against the organisers and different NGOs which had organised Aurat March in different cities.