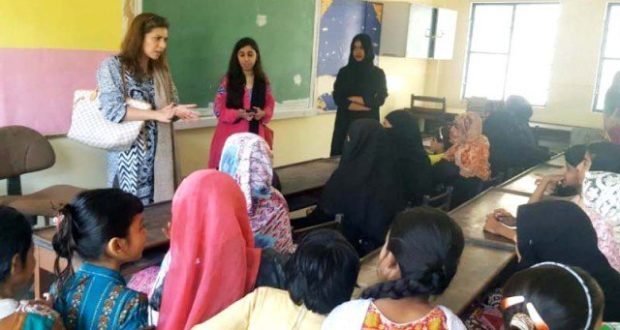 Posted by: admin in Women and Education April 24, 2019 Comments Off on Can female inclusiveness in education turn tables? 553 Views

Statistics show that the literacy rate of women in Pakistan is just 48% compared to 70% among men. Although education as a fundamental right of every individual is recognised in the Constitution, a large number of women remain deprived.

According to Article 25-A of the Constitution of Pakistan, “The State shall provide free and compulsory education to all children of the age of five to sixteen years in such manner as may be determined by law.”

But this is not implemented.

It is arguable if Imran Khan’s Naya Pakistan has materialised, but a change is certainly on the horizon in some sections of Pakistan’s society.

In the labyrinth of Korangi 5 is a school, where these seeds of ‘new thinking’ are taking root as women of all ages have come forward to educate themselves. All these women have one thing in common; they all belong to the underprivileged strata of society, and have been deprived of their fundamental right, access to education.

In an effort to uplift the dismal state of women education in Pakistan, The Citizens Foundation (TCF) has undertaken a literacy program to teach women how to read and write.

TCF is among a number of organisations engaged in boosting literacy rate in the country, particularly among women. In this regard, with the help of Bayer Pakistan, it has initiated the Aagahi Adult Literacy Programme, which teaches over 12,000 women annually from disadvantaged neighbourhoods how to read and write.

During a visit to the Aziza Noorani campus of TCF, the women shared their plight over having to adjust in life due to their illiteracy. From something as basic as reading signboards to writing your own name, these women struggled to get through the daily grind.

Bismillah, a middle-aged woman enrolled in the programme, told The Express Tribune how she got motivated to pursue an education.

She said that watching her children study stirred her interest and when she heard of the school, she sought more details.

“I came here to inquire and everyone really encouraged me to start taking these classes. Prior to this, I had not had any education. After I got married, I got busy with kids and the domestic life. However, here the teachers encouraged me to read more.”

Bismillah’s story is the story of most women in Pakistan, who have to give up their education or their careers for the household responsibilities. But the culture seems to be changing as more women shared how they were not inclined for their children to suffer the same difficulties they had faced.

Another student Kanwal, whose youngest child is in grade four, said, “My parents were not educated, which is why they did not focus on ours either. But now, we are learning for the better future of our children.”

She said that despite the difficulties, they were trying to ensure that their children were educated by covering as many expenses as they could.

“We are doing as much as we can afford, through chores like sewing. I want my children to pursue a complete education.”

Her optimistic outlook on life was also shared by her daughter who attended the classes with her and was determined to be a doctor.

Many women in the programme shared the view that obtaining the basic skills of reading and writing has made their job easier.

Asma shared that she has been coming to the TCF centre for three years and knows English and Math. “I can read and write. Now, when my children ask me questions, I am in a position to explain it to them. It feels good.”

Kanwal remarked that she was able to handle calculations as she did her groceries.

Shahana, who is now a grandmother, said that her children kept telling her that she doesn’t know anything and so after they completed their education, she decided to pursue hers.

“Before, I could not even read or write anyone’s number but now that has changed.”

She stressed that in this age when computers have become mainstream, not being educated is not an option.

“Everything is in English now, Urdu has become secondary.”

Perhaps the oldest student in the class, Gul Bahar has been at the centre for 16 years. Although she works as a maid, she also attends classes. However, due to her health issues and advanced age she has to struggle to learn.

“I learn what they teach every day, but then I forget. However, I still come back every day.”

Sharing a personal incident, Gul Bahar said, “When I go to the hospital, I have to ask people what number it is or what the sign says. Some people answer, some don’t, so it gets a bit difficult. Had we known how to read, we wouldn’t be in this situation, which is why I attend these classes.”

Apart from providing basic education, the Aagahi programme is also working with the State Bank of Pakistan to raise awareness about financial literacy. A trainer from the central bank visits to inform the students on how to save and create budgets through examples. In 2015, Pakistan became a signatory to the UN’s 2030 agenda for sustainable development by agreeing to implement its 17 Sustainable Development Goals (SDGs).

The fourth goal emphasises equitable quality education and promoting lifelong learning opportunities for all. Financial literacy is also one aspect of this and in this regard the central bank launched Pakistan’s first ever Nationwide Financial Literacy Program (NFLP) on January 20, 2012. The programme seeks to promote financial inclusion through spreading financial education for inclusive economic growth and stability across the country

Out of the total adult population of Pakistan, the financially excluded population makes up 53%. One of the major reasons for why large portion of population is unbanked is the lack of awareness of financial products and their usage. Often, representatives from telecom companies also accompany the trainers from the central bank to teach the women how to use the branchless banking service providers like Easypaisa or JazzCash.

Although, it is imperative that women get quality education, it is a fundamental right of both genders. Hence, the TCF has also initiated a programme to educate men from the disadvantaged backgrounds.