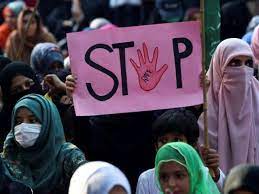 Posted by: admin in Gender Based Violence 21 days ago 0 34 Views

In light of the horrific rape cases that have surfaced during the past many years, the federal government has decided to set up anti-rape crisis cells in all districts, which will be supervised by a 42-member Anti-Rape Ordinance Implementation Committee. The purpose of these anti-rape crisis cells will be to ensure that the due process — registration of a case with the police, medical examination and forensic analysis — is carried out promptly and efficiently. The government believes that this, coupled with the salient features of the Anti-Rape Ordinance and the establishment of special courts, will surely help curb the long-standing issue.

No doubt, Pakistan is slowly catching on with regard to better understanding and addressing the issue of rape — the two-finger virginity test has been abolished and stricter punishments such as castration have been introduced — but, will merely strengthening the legal and administrative side of things be enough? While this new system may provide some semblance of relief and justice to rape victims, it does not address the issue in its totality. The only way to ameliorate such a crisis is by nipping it in the bud; the point is to prevent such incidents from occurring in the first place. In this regard, the government has failed to acknowledge that perpetrators are a product of our own society. The prevalent rape culture normalises harassment and violence, while extreme ideologies that are enforced on individuals from a young age result in sexual repression during adulthood. Both instances lead to a person committing the evil act. Even though there isn’t a set solution to the problem, education is a powerful tool that can be used to combat the stigma attached to women and teach children about “good” and “bad” touch. The fact that most people do not know about or don’t believe in marital rape shows that we as a society severely lack awareness. Apart from putting an end to impunity, empowering rape survivors and creating a safe space, the government must also direct these soon-to-be established “crisis” cells to address cultural stigmas through education and awareness. Our society’s moral compass has gone astray