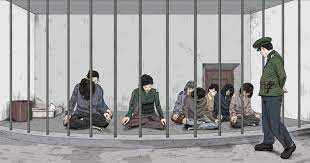 Posted by: admin in Gender Based Violence July 14, 2022 Comments Off on 10 booked for torture, public humiliation of woman 30 Views

TOBA TEK SINGH: Faisalabad’s Balochni police on Wednesday booked 10 people, including two women, for allegedly torturing a woman and tearing down her clothes publicly after her husband lodged a theft complaint nominating one of the suspects.

According to the FIR registered under sections 354-A, 148 and 149 of the Pakistan Penal Code (PPC), complainant Rehana Tariq of Jaranwala tehsil’s Chak 69-RB village stated that her husband Tariq Mahmood had lodged a theft complaint with police against one Murtaza and his accomplice.

She alleged that enraged by the complaint, Murtaza, along with seven men and two women barged into her house when she was alone.

The complainant said the suspects dragged her into the street, pulling her hair, and not only subjected her to torture, but also tore down her clothes, leaving her naked in the public.

On her complaint, police registered a case against the 10 suspects.

Meanwhile, a press release said that City Police Officer Ali Nasir Rizwi took notice of the incident and on his orders police immediately raided the suspects’ houses arresting three of them — Murtaza, Wasim and Ranjha.

It quoted the CPO as saying that raids were being conducted to arrest the remaining seven suspects.

INJURED: At least 13 persons, including women and a minor girl, were injured in a brawl over a monetary dispute between two rival groups at Faisalabad’s Chak 239, RB Harla village on Makoana-Khanuana bypass on Wednesday.

According to police, both sides used clubs and bricks against each other, leaving 13 persons, including 10-year-old Zainab, Shahnaz (35), Azam (45) and Safia (30), seriously injured.

Rescue 1122 reported that the injured persons were shifted to the district headquarters hospital.

Police are looking into the matter.