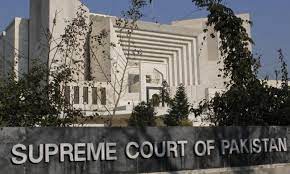 ISLAMABAD: The Supreme Court has stopped civil judges in Sindh from heading committees formed to oversee flood relief efforts and said vulnerable groups, particularly women, should be given the job.

The citizen committees were constituted in September on the directions of Sindh High Court’s (SHC) Sukkur and Larkana circuit benches in every taluka of Sukkur, Larkana and Shaheed Benazirabad divisions and Naushero Feroze district.

The high court had directed that a civil judge will head the committees and work under the supervision of the concerned district and sessions judge.

The verdict, authored by Justice Malik, clarified the committees themselves will not engage in directing or controlling the relief work.

Instead, they will participate in the process put in place by the District Di­­saster Management Authority (DDMA) to make it more effective and inclusive.

She emphasised that as per the National Policy Guideline on Vulner­able Groups in Disasters, 2014, the participation of women was required in disaster management plans at all levels to ensure the integration of gender perspectives.

As per the policy, women were at greater risk from natural disasters than men, the judgement said, adding they were vulnerable victims in natural disasters and also play a significant role thr­oughout the disaster management cyc­­le, without being adequately recognised and included in the decision-making.

The affected areas always require maternity and healthcare for women therefore there was an increased need for female doctors, trainers and caretakers to attend to the health concerns, the verdict remarked.

Women are also subjected to gender-based violence and harassment in times of such calamities, therefore safety and security concerns were also of significance for which appropriate response was required.

Justice Malik directed that the committees should comprise medical superintendents of the taluka hospitals, mukhtiarkars (attorneys), PDMA’s focal person and the president of the respective taluka bar association.

In his additional note, Justice Shah emphasised the need for a climate-resilient adaptation plan and a detailed mechanism for the utilisation of funds given to Pakistan.