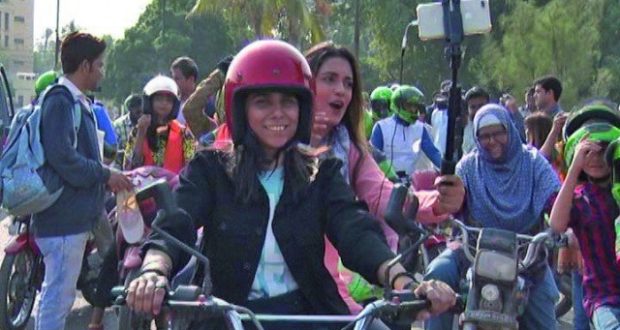 ‘Women on Wheels’ kick-starts in Karachi

KARACHI: The launching ceremony of the ‘Women on Wheels’ campaign, aimed at making women self-reliant by training them to ride motorcycles, was held at Frere Hall on Sunday. The campaign has been launched by the Salman Sufi Foundation, in collaboration with the Sindh government.

Speaking on the occasion, Salman Sufi Foundation Chairperson Salman Sufi said, “Everyone has the right to be self-dependent but women in Pakistan are deprived of this right.” The campaign, initiated to teach them how to ride motorcycles, will make them independent, he added. Sufi said that initially, the campaign will be limited to Karachi but he plans to expand its reach to rural Sindh in the future.

He informed the audience that 10,000 women will be taught motorcycle driving as part of the campaign and they will also be provided assistance to get driving licences. In addition to driving, they will be imparted training for maintaining safety and dealing with harassment, he said.

Sufi appreciated the provincial government for extending its cooperation in establishing and running the campaign and said that a similar campaign has been successfully run in Punjab in the past.

Adviser to Sindh Chief Minister on Law, Environment and Coastal Development Barrister Murtaza Wahab too spoke on the occasion. He said that the campaign will enable women to travel to schools, universities and workplaces on their own, terming the initiative “a milestone in women’s journey of achieving self-reliance.” Wahab added that ‘Women on Wheels’ campaign will make life easier for women in the province.

“I assure that I will facilitate the provision of all possible assistance for running this campaign on behalf of the Sindh government,” said Wahab. He said he will also try that women trained under the programme are issued licenses for free. “It will be a small gift for them from the government,” he added.

He said, “Pakistan Peoples Party follows a democratic ideology and condemns discrimination on the basis of gender, religion, colour or creed.” The party chose a woman as the prime minister, he said, adding that it was Benazir Bhutto’s dream that women in the country are empowered. “We are working towards achieving this dream of hers,” said Wahab.

Addressing the ceremony, Sindh Women Development Minister Shehla Raza said that she has also registered for the campaign and the government plans to expand the campaign to Sukkur and Nawabshah. She further said that ‘Women on Wheels’ is one in the series of many programmes aimed at empowering women, initiated by the Sindh government, and these will be strengthened via legislation.

A motorcycle rally was carried out at the end of the ceremony, during which Wahab and Raza rode motorcycles along with others.

2019-11-25
Web Desk
Previous: 118 incidents of violence reported in 11 months
Next: Women start learning to wheel themselves towards success