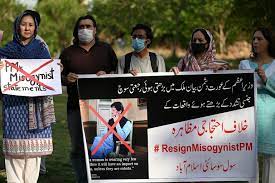 Posted by: admin in Harassment June 23, 2022 Comments Off on Women harassed in most government departments, insist rights activists 40 Views

SWAT: Human rights defenders here on Wednesday insisted that women were harassed in most government departments in the province and it was high time to stand united for the protection and promotion of human rights to ensure a prosperous and peaceful Pakistan.

They gathered in a workshop organised by civil society organisation Lasoona in Saidu Sharif area in collaboration with National Commission for Human Rights Pakistan, European Union and Welthungerhilfe.

Civil and rights activists and government officials attended the event.

They said during the previous 10 years, 2,121 child abuse and harassment cases were reported in the province, while the incidents of women harassment at workplaces totalled 16.

Mr Tariq said the NCHR investigated the alleged human rights abuses, examined the existing and proposed legislation on human rights, monitored and reviewed reports on the state of human rights, and made technical recommendations and follow-up on the implementation of treaty obligations.

Ms Rukhshanda said unwelcome sexual advances, request for sexual favors or other verbal or written communication or physical conduct of a sexual nature or sexually demeaning attitudes, causing interference with work performance or creating an intimidating, hostile or offensive work environment, or any attempt to punish complainant for refusal to comply with such requests meant harassment.

She said all government and non-government organizations must have a three-member committee to look into harassment complaints by employees.

She said her organisation provided several services to women, including free legal aid.

Mr Ijaz Khan highlighted children-related issues in the province and said the government had established 12 district child protection offices and was setting up more.

He said it was people’s responsibly to contact those offices immediately after child rights were violated.

“We are working with the Unicef on the formulation of a comprehensive policy to protect child rights and address child abuses in the province,” he said.

Ms Aneela said her organisation was ensuring that all human rights activists worked together for rights protection in the province, and would continue working with all relevant organizations for the purpose.

2022-06-23
admin
Previous: Case against two for girl’s kidnap
Next: Man arrested on charges of assaulting mother