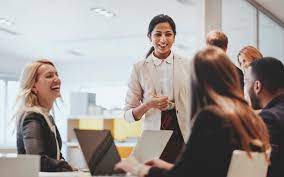 Posted by: admin in Miscellaneous News October 25, 2022 Comments Off on Women at work 46 Views

Women’s concerns have always been critical to the historical evolution of their roles; earlier for oppression and usurpation of rights on the social front, and post the industrial age, for suffrage, equal remunerations, promotion policies at work, exploitation and pushback, unfair treatment and bias, the ceilings for women have remained low.

While the developed world necessitated creative and newer perspectives focused on economic prosperity by ensuring work on gender inclusivity, the developing world is taking its own sweet time. Perhaps not so sweet is Pakistan, despite having a substantial female population of 48.5 per cent, not having yet utilized its women’s workforce more productively.

Industrialization in the developed world brought women into the mainstream workforce to replace men engaged in warfare, particularly during the 19th and 20th centuries. Since then, the trajectory for women involvement in economic growth has consistently improved, allowing education and growth opportunities for women in corporate, education, SMEs (small and medium-sized enterprises) and many other sectors. Developing countries, however, have continued to struggle in this realm.

Covid-19 happened in 2019 and it upended the status quo, allowing shutdowns to push towards an economic downturn and IoT (Internet of Things) upwards. Before we knew it, we were linked through fiber optics and satellites across the globe. Working modalities changed, followed by massive downsizing and declining profits and for the mere sustenance of the business. A complete analysis of the impact may not be possible for another two to three years; nevertheless, the world has already rolled out analysis and impact studies to better understand the impacts of the pandemic and plan ahead.

Amongst economic, social, industrial, and environmental, one filter stood out as the most unexplored one – this was the one with a focus on women, especially women at work. It is astounding to note how women at work shouldered greater burden, suffered more, and paid a higher price, while they worked harder than their male counterparts. This is an excellent filter, not just for mapping and documenting the women workforce, but for understanding their economic presence, contributions to the economy and developing a deeper insight for resolving the highlighted issues and planning better for the 21st-century requirements of the Digital Age.

For Pakistan, this breakthrough came through the distinguished offices of the US embassy in Islamabad, the US Chamber of Commerce’s US Pakistan Business Council, and the US-Pakistan Women’s Council (USPWC), in partnership with Texas A&M University, and S&P Global Pakistan. Together they launched the ‘Pakistan Future of Women and Work Initiative,’ a detailed study report on the impact of Covid-19 on women’s workforce participation in Pakistan.

Highlighting the US provision of $53.1 million in humanitarian assistance and resilience programming to support Pakistan in the wake of devastating floods, US Ambassador to Pakistan Donald Blome said, “Just as the Covid-19 pandemic highlights the disproportionate impact on women’s participation in the workforce, the catastrophic flooding in Pakistan is a reminder that women and girls are among the most vulnerable groups during a humanitarian crisis. As the United States works to provide direct assistance to affected communities in Pakistan and to help mitigate the effects of future floods, we will closely consider the unique impacts of the current flooding and other natural disasters on women and girls.”

It would be good to question and understand why we need a specific analysis of the impact on women. As of 2021, women constitute almost equal half of the global population and 38.8 per cent of the global workforce. This number has declined from 46.4 per cent in 2019. The women workforce in Pakistan was reported at 20.16 per cent in 2021, way below the required global indicators.

At the launch event, the State Department’s Principal Deputy Assistant Secretary for South and Central Asian Affairs Elizabeth Horst said, “Through the US Pakistan Women’s Council, the United States has been working for a decade to build bridges between the people of our two countries to support Pakistan’s sustained prosperity, benefiting thousands of women in Pakistan. Today’s initiative helps create a foundation for greater collaboration and exchange between our two countries on women’s economic advancement. When women are not part of the economy, whether in boardrooms, banks, laboratories, or start-ups, Pakistan misses out on growth for the entire country. When women are included, everyone wins.”

Summing up the findings of the report in three categories of home, work, and health. From the in-depth analysis and findings of the report, we can take three tangents to work with: How can we value women’s work? How can the female workforce be used more productively? And how can regularly designed surveys help?

Covid-19 crisis affected everyone, but women and girls faced additional risks due to socially inculcated inequalities, cultural biases, lack of awareness of their rights, and adoption of uniform human resource policies that cater to both men and women without acknowledging basic gender needs except for certain biological distinctions, hence offering maternity leaves for women. This is the first time that a women-specific survey has been conducted in Pakistan, for Covid-19. We value Pakistani women and their contributions immensely and a focused analysis like this goes a long way in our understanding with clarity and forward planning.

At home, the shutdowns increased available family time but simultaneously it also increased violence, making women vulnerable to becoming a victim for financial and social frustrations. Heightened anxiety was also reported for the same. But those who had paid for help at home fared better. As the care work increased significantly for women during the pandemic, the psychological impact grew stronger.

At work, the paradigm shifted as more women lost jobs or suffered pay cuts than men. Women who retained jobs complained of additional responsibilities to combat the downsizing across the board. According to the findings, about 37 per cent of interviewed women reported an increase in responsibilities. As women typically earn less, have fewer savings, and hold less secure jobs, they are more susceptible to economic setbacks. Additionally, women-centric industries like hospitality, tourism, and retail plunged into a nosedive to worsen the impact.

Talking of health and well-being, the psychological impact has been the most significant for women. As per the report, the crisis was associated with increased anxiety in about 35 per cent of the sample. Just over 30 per cent reported feeling fearful during the crisis, about a quarter reported crying more easily, and experiencing more physical conflict and spousal abuse.

How can we move forward? Pakistan is the sixth most populated country, with 48 per cent women population. Yet it ranks second lowest when it comes to the issue of gender equality or the lack of it. Gaps in productive rights and gender-based violence dominate women-centric issues.

Gender diversity should be made a priority to officially address this gap. Hybrid workspaces that are already on the rise need to become part of the HR manual permanently to ensure inclusivity and ease of work. Flexible work culture, well-being of employees, and maternity factors need to be targeted across the board and ideally through proactive government policies.

This study highlights substantial factors for us to review. We need a separate economic lens to understand and enhance productivity of the female workforce. A supportive corporate environment and social infrastructure that allows health and wellbeing as a priority is critical to contribute towards Pakistan’s economic prosperity. A company like S&P Global stands strong with a ‘Women Empowerment-oriented Policy Framework’ and their model can be replicated across the board for enhancing inclusivity and tapping into unexplored talent.

This study can be extrapolated in not just rectifying long-standing inequalities but also in building a just and fair community for women at work and enabling their access towards better opportunities.

The writer is a seasoned educationist, communication specialist and director with Heritage Foundation Pakistan.