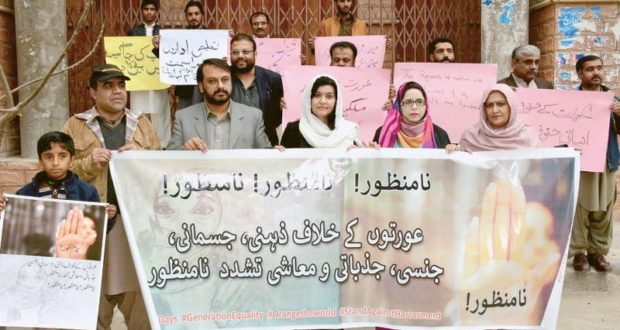 QUETTA: Women activists staged a rally here on Sunday to raise voice against violence and harassment being faced by women, particularly in Balochistan.

A large number of women activists belonging to a rights organisation namely Shirkat Gah marched on main roads of the city while carrying placards and banners inscribed with anti-violence and harassment slogans.

The march culminated in a demonstration outside the Quetta Press Club where the participants chanted slogans against the elements involved in violence and harassment against women.

Speaking on the occasion, rights activists Hameeda Noor, Qamar-un-Nisa, Behram Baloch and Mir Behram Lehri said that 16 days of activism were being observed around the world to raise awareness regarding the rights of women.

In this regard, Shirkat Gah has organised several events including training workshops, painting exhibitions and awareness walks.

A table talk with journalists was also organised in the press club which advocated for legislation on women’s rights, they said.

The speakers said that the role of women in the development of the country was vital. Society can only progress if the women have equal opportunities.

“The education of girls has suffered because of the recent University of Balochistan harassment scandal,” they deplored.

This year so far in Balochistan, 52 women had been killed in the name of honour and three incidents of acid attacks had been reported, the speakers said.