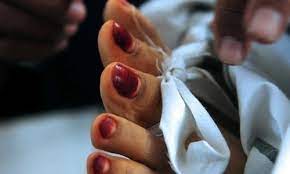 TAXILA: A woman was shot dead, allegedly by her son, to get revenge for murdering his father.

Mohammad Hafeez, second husband of the victim, reported to police that he married Suraya Begum on April 17, 2017 after the sudden death of her first husband Mohammad Ilyas.

Later, her son (from her first marriage) got a case registered against her, accusing her of plotting the murder of his father Ilyas. She was subsequently arrested.

The court set Suraya free due to lack of evidence a few weeks ago. On Thursday, however, the suspect shot her dead and managed to escape.

In the second incident, a rickshaw driver died when he lost control over his three wheeler due to over speeding on Haji Shah road near China chowk in the jurisdiction of Attock Police station.

Police and rescue sources said the deceased was identified as Gohar Jamal.

Moreover, thieves broke into the house of Asim Tanveer in the jurisdiction of Wah Cantonment police station and escaped with cash, gold ornaments and other valuables worth Rs300, 000.