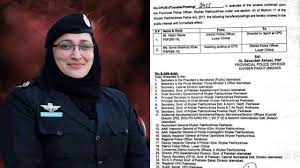 LAHORE: The Punjab government has removed woman District Police Officer (DPO) Layyah Shazia Sarwar and made her official on special duty (OSD), just two months after her appointment as head of the district police.

She was the first female police officer from Balochistan who was posted as DPO in the largest province where women police were accounting for only 2.25 per cent of the total strength.

Her appointment had been widely appreciated as a goodwill message for the women police officers joining the federal service from the under-privileged Balochistan province.

Similarly, the government also changed the Lahore police Crime Investigation Agency (CIA) chief Asim Iftikhar and posted him in Faisalabad besides reshuffling dozen other police officials across the province.

The ‘sudden’ removal of the DPO Layyah came as a surprise for many in the police circles who said ‘some elements’ sitting in chief minister secretariat have grabbed an opportunity in the absence of the regular police chief to make postings of ‘controversial officers’ across the province.He said acting IG Kanwar Shahrukh has no powers to run the policy matters and transfer/postings of 14 police officers were made through the CM secretariat.

The official said CIA police chief Asim Iftikhar was transferred reportedly on the ‘recommendations’ of the Lahore Capital City Police Officer (CCPO) Ghulam Mahmood Dogar as he was not in good terms with Mr Iftikhar since he (the CCPO) assumed his charge.

In the past, he said Mr Dogar had made some serious attempts for the transfer of the CIA police chief but failed when the IG Punjab came to the support of Asim Iftikhar.

He said Mr Khan had complained to the IG Punjab that Faisal Mukhtar was not obeying his ‘orders’ and suggested him to launch an inquiry against him.

In light of his written complaint, the IG Punjab had deputed DIG Information Technology Ahsan Younis as an inquiry officer.

The Punjab government, however, removed Faisal Mukhtar from his post when the inquiry was pending, he said.

The source said the DPO Sheikhupura was transferred ‘prematurely’ as his boss (RPO) had used his ‘connections’ in the Punjab government of the PML-Q.

The provincial government also removed another woman police officer Shahida Naureen who was serving as SP investigation Sahiwal and made her OSD.

According to a notification, the government also reshuffled some other police officers across the province.