Latest News
Home / In Focus / ‘When a victim is not believed, rape culture flourishes’ 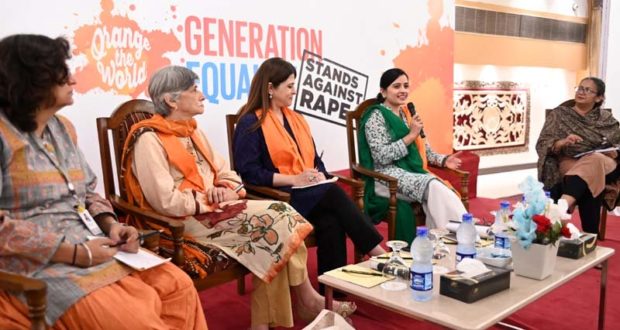 ‘When a victim is not believed, rape culture flourishes’

KARACHI: “Every time a woman speaks up about her experience of sexual violence and she’s not believed, rape culture flourishes,” this was the message sent by United Nations (UN) Women to mark the 16 Days of Activism against Gender-Based Violence (GBV) – a global campaign that takes place each year from November 25, the International Day for the Elimination of Violence against Women, to December 10, the Human Rights Day.

In this regard, the UN Women Pakistan, in collaboration with Women Development Department (WDD) and Sindh Commission on the Status of Women (SCSW), recently organised a seminar in Karachi to discuss ways in which sexual and other forms of gender-based violence can be eliminated from the province.

Divided into three panel discussions on prevention, response and rehabilitation, respectively, the event not only raised some very important questions about the rampant culture of rape, especially the increasing number of rape incidents involving minors but also shed light on robust strategies to prevent and eliminate sexual violence against women and girls.

Speaking on the occasion, Provincial Minister for WDD Syeda Shehla Raza said that work on preventing and ending violence against women at the global, regional and national levels shows that there is widespread impunity on sexual violence and rape.

“The topic is usually considered a taboo and not debated among people. This year, it is stressed to break the silence and talk against rape.”

Raza said that it is pertinent to acknowledge that government departments often face difficulties in performing their jobs because of a shortage of staff, adding that media also plays an important part in creating awareness and should avoid sensationalising a topic as sensitive as sexual violence.

“Creating awareness about rape and sexual violence in the society is necessary,” she said. “As a representative of the government, I promise that I am with everyone who is fighting for women’s rights.”

Raza also added that her department will whole-heartedly listen to suggestions and solutions put forward by NGOs and civil society members and assured that the government is committed to serving the people.

“With the support of UN Women, the WDD has revised Gender Equality and Women Empowerment (GEWE) Policy which will also be launched soon,” she informed the participants.

SCSW Chairperson Nuzhat Shirin said that people in Pakistan are still unable to use proper terms to define rape.

“[Even after the amendment made to the Zina Ordinance] people still don’t even know the difference between zina (adultery/ fornication) and zina bil jabr (fornication by force),” she said.

“Rape is a non-negotiable crime. It cannot be forgiven nor forgotten which leaves lifelong scars on the victim because it is a heinous crime and remains unreported by victims due to the stigma attached to it,” she said.

Shirin explained that the biggest disadvantage of not reporting rape is that the perpetrator escapes unscathed, a practice which has led to a surge in the number of rape cases, especially against children.

Like Raza, Shirin also pointed out the way some media outlets resort to sensationalised reporting of rape cases, which violates victims’ privacy.

“The SCSW receives many complaints on sexual violations against both girls and boys. Unfortunately, many news reports do not respect the confidentiality and privacy of rape and sexual violence survivors,” she said.

Secretary WDD Dr Alia Shahid enlightened the participants with the background and history of the 16 days of activism.

“Gender-Based Violence is a violation of human rights. The WDD has come up with a strong sexual violence response framework that would work to end violence – including rape – against girls and women,” she added. “The framework covers three main areas – prevention, response and rehabilitation.”

The first panel discussion was based on how to prevent rape and sexual violence. The panellists discussed the role of government and non-governmental organisations in educating people and creating mass awareness, which they considered the key to ending sexual violence against women.

They explained how, across the globe, there are different mechanisms that can minimise rape cases but lamented the lack of Pakistan-based research in this area.

“In the past, only women were victimised but the situation is getting worse with the passage of time because perpetrators are now targeting children,” Executive Member SCSW Raheema Panhwar said.

“We earlier believed that punishing rapists and sentencing them to capital punishment will lessen the number of rapes. However, we saw that in the case of Zainab Ansari – the seven-year-old rape and murder victim from Kasur – the criminal was hanged but incidents of sexual violence did not decrease,” she recalled. “In order to eliminate rape culture from society, a “rapist-centred approach,” based on counselling and behavioural change communication (BCC), is essential.”

Chief Gender Advisor Sindh Education Department Dr Fouzia Khan explained that her department has already incorporated life-skills based education in schools across Sindh, where concepts such as self-defence and awareness about one’s body are spread among schoolchildren.

“We also tried to establish some discussion clubs in schools where young girls could open up about their ordeals, but since many cases of sexual violence involved the victim’s family members, girls did not feel comfortable sharing their stories. Hence, the idea did not prove to be successful,” Dr Fouzia added.

Resident Director of the Aurat Foundation, Mehnaz Rehman agreed with Dr Fouzia and explained that in more than 80 per cent of rape and sexual abuse cases, the perpetrator is known to the victim. She also stressed that when campaigning against rape, one should focus on rapists and avoid repeatedly telling the victim that she has been victimised.

“Instead of holding demonstrations based on the name of the rape or murder victim, make the protests about the rapist. Name and shame them so that they are remembered by the society for their dreadful crime, she said.

Professor at Habib University Shama Dossa concluded the session by stressing that in order to prevent rapes and incidents of sexual violence, advocacy is necessary.

“Women must be made aware of places and services where they can get support so [that they know where to seek help if an untoward incident happens],” she said.

The need for a strong response mechanism

“[Owing to the negative and humiliating treatment that rape victims have to endure at police stations and courts], more and more women request to appear before female judges and women officers,” said Advocate Dr Rana Nasir.

“Victims want the prosecution and proceeding of their cases behind closed doors where they don’t have to repeat their ordeals before men,” she said, adding that women’s police station must be built in every part of the province. “It is an approved plan but still pending implementation”.

Beena Hasan from War Against Rape (WAR) talked about the role of police and said that generally and historically, the attitude of the police in dealing with rape and sexual assault cases has been negative for the victims.

“[Because of the humiliation women face when registering FIRs], they don’t want to go report their cases. The police department must create a women-friendly environment for rape victims so that they can open up about their experiences and justice is served,” she said.

Shedding light on the medicolegal response, Sindh Police Surgeon Dr Qarar Abbasi shared that despite the growing number of cases, there are only four women medicolegal officers (WMLOs) in Karachi to examine rape victims. The number of male officers is 17.

“Apart from an acute dearth of staffers, there is only one DNA-testing lab in Karachi, which is certainly not enough. It is required by law to carry out DNA testing of rape victims.”

He said that doctors are not incentivised to work in this department, which has led to such a low number of medicolegal officers in the provincial capital.

“If the government offers better pay and incentives to doctors, the situation can be considerably improved,” he concluded.

The third panel discussion was based on rehabilitation mechanism for rape survivors and how therapists and counsellors can help them recover from trauma. The panel also discussed the challenges faced by service providers.

Associate professor at NED University Dr Shehnila Zardari, who has extensively worked to spread awareness on GBV on campus and is also developing a mobile-phone application to facilitate victims, said that before moving ahead, people must know that rapes and incidents of sexual violence are not confined to rural settings, as they happen in urban centres all the time, too.

“Rehabilitation is all about turning victims into survivors. They must be told that they shouldn’t blame themselves. It is only the rapist’s fault,” she said.

Development sector professional and mindfulness and well-being facilitator Dr Noorulain Masood talked about trauma and the effects it can have on the rape victims.

“When a rape victim is experiencing trauma, they face three conditions: their brains’ alarm system becomes hyperactive, their memories become fragmented, and the prefrontal cortex of their brains starts malfunctioning,” she said, adding that the condition bars their ability to recall their ordeal and explain it in courts again and again.

Additional Police Surgeon Dr Summaiya Syed explained the issues faced by rape survivors when they come to her for rehab. Citing some heart-wrenching incidents, Dr Syed said that many people don’t go for rehabilitation because of its high costs as well as the lack of confidentiality.

She also lamented the shortage of women medicolegal officers which discourage victims from seeking help.

“We have only one WMLO for 600,000 women in Karachi. If manpower is increased, we can handle the situation in a much better way,” she concluded.

2019-11-27
Web Desk
Previous: Activism to fight violence against women gets underway
Next: ‘Rape survivors must be encouraged to speak out’