LAHORE: Police foiled an attempt to send off (rukhsati) a six-year-old girl with her 22-year-old groom in Dubai Town near Thokar Niaz baig here on Sunday.

Sumaira was married to a man thrice of her age because the girl’s family was unable to repay a loan to the father of groom Khizer, Chuhng ASP Irfan Ali Samoon told Dawn while quoting girl’s aunt.

“The bride is a Class-I student while the groom is a labourer at a farmhouse in Green Acres, Nawab Town,” the ASP said adding that parents of the bride and the groom were among seven persons arrested for arranging the marriage.

A child rights activist had alerted the Nawab Town police about the marriage ceremony.

The ASP said that groom Khizer, his father Ijaz Husain, his mother, bride Sumaira, her father Abbas and stepmother and two other relatives were arrested.

The minor girl (bride) was later handed over to the Child Protection and Welfare Bureau.

He said that Sumaira was six-month-old when her mother had died and her father contracted the second marriage.

The families of the bride and the groom besides participants of the marriage belonged to a remote village of the Bahawalnagar district.

The ASP said that families of the minor girl and the youth had already completed rituals like mehndi and solemnized nikah while rukhsati (sending off) was being held when the police intervened.

He said that dowry articles, including cloths and jewellery, besides food and catering items for walima ceremony were also seized.

He said the minor girl was living with her aunt, but her father Abbas had taken her to Lahore about six months back to get her married with a person of his in-laws.

One of the participants told police that it was an exchange marriage.

Girl’s father Abbas had contracted second marriage with the aunt of the groom some three years back and had committed to marrying her daughter in his in-laws.

Police had registered a case against the suspects under the Child Marriage Restraint Act on the complaint of the Child Protection and Welfare Bureau. 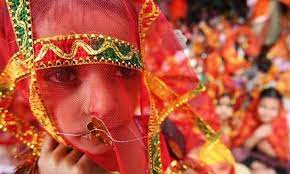 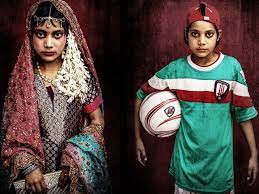