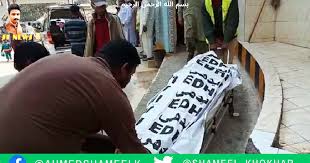 SWAT: Two married women have been killed in the name of honour at two different places in Swat.

According to police, wife of one Mohammad Nawab, a resident of Shin area of Khwazakhela, left home as her husband used to beat her.

“She took shelter in Darul Aman in Mingora, but recently Nawab convinced and took her back to their home,” said SHO Khwazakhela police station Saeedullah, adding that after taking her home Nawab shot her dead on Thursday.

He said the police arrested Nawab and had filed a case against him.

In another incident, Jamd Ali, a resident of Kadono Manglawar, also shot his wife dead after taking her back home from Darul Aman.

“Fed up with her husband’s atrocities she ran from her house, but Jamd Ali patched up the differences with his wife and took her back home. Later, he shot her dead at home,” said SHO Ziauur Rehman.

He said the police had started search to arrest him.