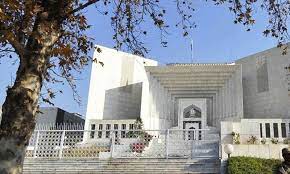 Posted by: admin in Gender Based Violence 15 days ago 0 14 Views

ISLAMABAD: The Supreme Court (SC) has ruled that the convicts found guilty of rape of women and children cannot seek the presidential pardon. Hearing an appeal on Thursday submitted by a rape convict, Habib Ullah, for obtaining remission during jail term, the apex court, while rejecting his plea, ruled that no rape convict condemned for rape of women and children would be allowed any leniency. It barred the rape convicts from seeking a presidential pardon.

According to the apex court ruling, the convict will not be entitled to any remission or facility provided by the jail authorities to common prisoners during their terms. The Supreme Court issued the order to prevent rape incidents against women and children. According to the Islamabad Police, as many as 200 cases of rape and kidnappings were reported in four months this year while 167 cases of rape were registered during the first quarter of the last year.