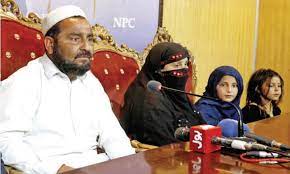 Posted by: admin in Gender Based Violence 21 days ago 0 29 Views

ISLAMABAD: The family of 10-year-old Farishta, who was raped and murdered two years ago, on Thursday said that they had been running from pillar to post for justice, but there was still no hope for it.

Addressing a press conference held at the National Press Club (NPC), Gul Nabi, father of Farishta – accompanied by his family said all of his life savings had been spent on the case to get the suspect convicted. Hearings have been going on since the last two years but justice is yet to be delivered, he added.

At the time of the arrest and then later, the then IG had said that justice will be delivered, he said, adding but now they are saying that the suspect did not even commit the crime.

He said the suspect, arrested by police was involved in similar crimes before but he was not punished.

The attitude of the court, police and lawyers towards us is inappropriate, he said, adding there is no justice for the poor. The court is not paying attention to the case and even after two years there is no hope of getting justice.

On the other hand, a letter written by the main suspect, arrested in connection with the case, came to the fore. The content of the letter was verified from the suspect’s son; it stated that the suspect was subjected to torture and given sedatives to confess the crime. It added that he was also illegally detained for weeks and later his arrest was made after he confessed the crime under the influence of the sedative, to avoid further torture.

The police have no evidence and the same is yet to be produced in court during the trial, the suspect’s son said, adding his father was earlier booked and arrested multiple times by police over allegations of rape, but in all cases he was acquitted.