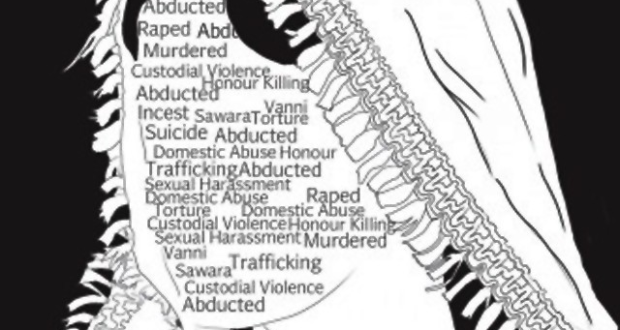 KARACHI: Violence is an excruciating ordeal, experienced by countless women in many forms – ranging from physical, psychological to sexual abuse. Conspicuously, what adds to the misery is victim-shaming and victim-blaming, which despite greater calls for awareness, is still practiced to a large extent in society.

Many victims do not come forward out of fear of being judged and scrutinised where instead they should be heard. And as the world comes together to demand an end to abuse and discrimination against marginalised sections on the International Day for Elimination of Violence against Women, voices have been raised to address issues, including rape, that are largely stigmatised and continue to have drawbacks on the overall wellbeing of the victims.

A panel discussion – part of a 16-day global activism campaign – was held at Lincoln Corner Karachi on Monday in an attempt to create awareness about gender based violence.

The discussion aimed to highlight the challenges, and in worse cases violence, that women face in rural and urban areas, at workplaces and homes. According to UN reports, 1 in 3 women experience physical and sexual abuse in their lifetime that leads to adverse consequences.

Speaking in the panel discussion Masarrat Misbah, the founder of Smile Again Foundation, particularly stressed on the ordeal of acid attack victims, which she described as the ‘most heinous form of domestic violence’.

“Many acid attack victims do not survive and even when they do, their lives are miserable on a daily basis.. they are mostly left to rot,” she lamented.

“People tend to hide such crimes because of the shame associated with them, implying that the women must have done something wrong to deserve this,” said Misbah, insinuating that common perceptions still have quite a strong role in determining the well-being of the survivors of violence and trauma.

The panelists stressed the need to spread awareness about women’s rights and educate the masses to end gender violence.

“Women are built strong and can very much support themselves,” said rights activist Alia Sarim from Sarim Burney Trust, terming education as their key weapon for empowerment.

“When cases of domestic violence emerge from bigger cities like Karachi, the situation is even more alarming,” she added.

Talking about the transgender community, Sarim affirmed that the trans community is also vulnerable to violence and they must be ensured their due rights are enjoyed by others, without any discrimination.

Share0Pin0Tweet0LinkedIn0Email0
2019-11-26
admin
Previous: International day for elimination of violence against women marked
Next: A helping hand was all these women needed