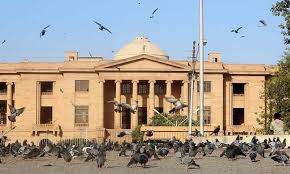 The Sindh High Court (SHC) directed the deputy inspector general of Sukkur to submit a weekly progress report on police efforts to arrest the culprits involved in raping and murdering a seven-year-old girl.

Presenting a report to the high court’s single bench of Chief Justice Ahmed Ali Sheikh, the DIG Sukkur and the SSP Khairpur submitted that DNA samples had been obtained from 124 people of the locality and their reports were awaited.

According to the report, the police have detained several people over suspicion and got samples of 124 people for the DNA tests. The court directed the police officials to submit a weekly progress report.

After seven-year-old Monika had been raped and murdered after being abducted in the Pir Jo Goth area of the Khairpur district earlier this week, the court took notice of the incident and called a progress report on the investigation from police high-ups.

On Thursday, adviser to chief minister Nawab Khan Wassan visited the family of the victim, conveying the messages of PPP Chairman Bilawal Bhutto Zardari and CM Syed Murad Ali Shah and telling the grieving parents that both the leaders had taken notice of the horrific incident and had directed the IGP to immediately arrest the culprits.