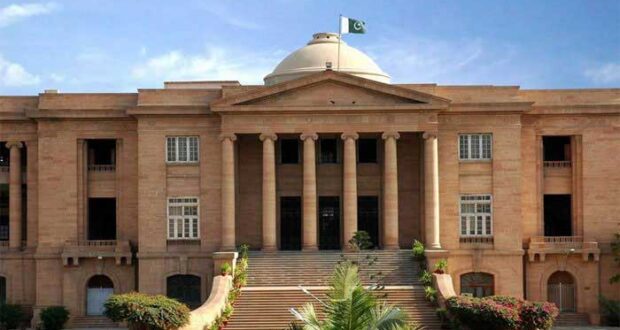 The Sindh High Court (SHC) on Wednesday directed a police investigation officer to proceed against a man under the Sindh Child Marriage Restraint Act for marrying a 16-year-old girl, Fauzia.

The direction came on the petition of Fauzia who sought protection and quashment of a kidnapping case against her spouse Noor Nabi registered by her family members. The petitioner submitted that she had married Nabi of her own free will in Larkana; however, her family members, being annoyed by the marriage, had registered a kidnapping case against her spouse and in-laws.

However, when the high court inquired the petitioner about her age, she conceded that she was 16 years old, to which the SHC observed that any person less than 18 years old living in the province could not enter into a marriage contract under the Sindh Child Marriage Restraint Act 2013.

A division bench of the SHC headed by Justice Mohammad Karim Khan Agha allowed the petitioner to live with her parents but directed the parents to ensure that they would not mistreat her. The high court also directed the investigation officer (IO) to note that the petitioner was not kidnapped, but told the IO to proceed against the petitioner’s spouse under the child marriage restraint law.

Meanwhile, a provincial law officer informed the SHC that the process for upgrading the software regarding the establishment of biometric system in all prisons of the province had been started.

Filing a progress report on a petition seeking the identity of under-trial prisoners through the biometric system and verification of their record through the National Database Registration Authority, the law officer submitted that the requisition had been made for computers and software equipment, and different types of equipment would be made available in the prisons within a short period of time.

The SHC directed the law officer to call the home secretary and inspector general of prisons on the next hearing so that the matter may be finalised in their presence for vigilance and follow-up in the future.

The petitioner, Ansar Burney Trust International, had submitted in the petition that reports regarding 41 fake prisoners had come to light during a briefing to then prime minister Nawaz Sharif on the security situation in the province. It was disclosed that at least

41 ‘fake prisoners’ were lodged in jails in Sindh in place of ‘others’, allowing the real inmates to move about freely. The petitioner submitted that it was a shocking report that raised so many questions of great concern pertaining to the violation of human rights.

The court was requested to order the constitution of a judicial commission, including representatives of human rights organisations, to ensure transparency in investigations into the reported presence of fake inmates in the jails of Sindh. The petitioner also requested the SHC to order strict action against officials involved in replacing the actual inmates with the fake ones.

The petitioner also prayed for the release of innocent prisoners and a direction to the jail authorities to compile the data of all the prisoners who had been incarcerated without any crime.