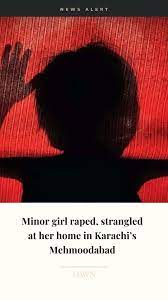 Posted by: admin in Gender Based Violence September 11, 2022 Comments Off on Servant kills minor girl after molesting her 23 Views

A 10-year-old girl was strangled to death by a servant and his friend before brutally torturing and sexually assaulting her in Kashmir Colony area of Mehmoodabad.

The police, taking timely action, arrested accused Zeeshan Rajput and his relative. Zeeshan lived on the upper floor of the house. The accused used to drive her father’s pick-up van and also used to bring them household goods. The girl had gone to give lunch to the servant and her relatives at the time of the incident.

Accused Zeeshan dragged the girl to his room and molested her before strangling her to death.

Karachi Chief says that the incident is being investigated from every angle.