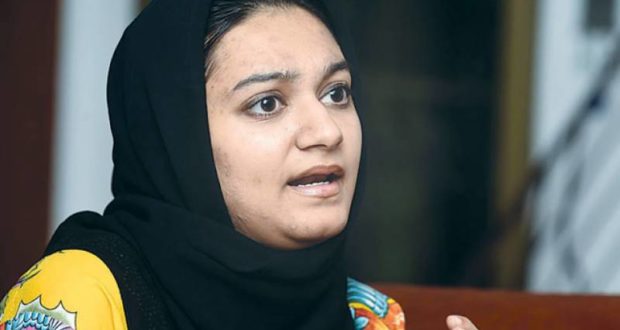 ISLAMABAD – Supreme Court on Wednesday set aside the LHC judgment of exonerating a young student, who is the son of a senior lawyer, from the charges of stabbing his classmate Khadija Siddiqui for 23 times in broad daylight.

Hussain had attacked Khadija in May 2016 near Lahore’s Shimla Hill where she, along with her driver, had gone to pick up her younger sister from school. Additional Sessions Judge Lahore in March 2017 had awarded five-year imprisonment to Hussain.

Restoring the sentence awarded by District and Sessions Court, the top court ordered police to take Hussain into custody.

The orders of restoration of imprisonment sentence and subsequent arrest of Hussain culminated into a sigh of relief for Khadija, who miraculously survived 23 stabs of sharp weapon.

“Truth always prevails,” said Khadija on service of justice adding that the top court had proven that one could not escape the truth even if the power was abused by oppressor. She termed her victory as the victory of every woman.

Hussain with no expressions of embarrassment on his face confidently told the media that he did not intend to file a review petition as there were no chances of relief for him from the court of Chief Justice Asif Saeed Khosa. A three-judge bench of the top court headed by Chief Justice Khosa and comprising Justice Maqbool Baqar and Justice Mansoor Ali Shah took up the appeal of Khadija for hearing. The appeal was fixed for hearing six months after its admission.

The entire case of Khadija revolved around mis-reading and non-reading of evidence by LHC. The contention of Barrister Salman Safdar, appearing on behalf of Khadija, was that LHC did not consider the overwhelming evidence through which the guilt of Hussain was established beyond the shadow of doubt.

During the proceedings, the bench inquired as to why the accused Hussain was not nominated in FIR and why the delay of five days was caused for nominating him as accused. The bench further inquired as to why the accused was not identified at the time of occurrence when he was much acquainted with Khadija, her younger sister Sophia Siddiqui and driver.

Barrister Safdar briefly argued and explained that the victim was completely traumatized as she was mercilessly and brutally stabbed 23 times receiving injuries on neck. He added that Khadija was in precarious condition and her statement could not be recorded. Replying to the query as to why the accused was not nominated in the first instant, the counsel contended since his client was traumatized so after gaining the consciousness she nominated Hussain as accused. It is for this reason that five days delay was caused, he argued.

The bench noted that the statement of doctor, who was supposed to pen down Khadija’s statement, was ordered by the surgeons to leave the room so that her life could be saved.  Agreeing with the bench, Barrister Safdar further contended that the doctor could not complete the job because surgeons asked for leaving the room and the doctor had to leave the place in the mid of Khadija’s statement.

Chief Justice Khosa after going through the photographs observed that the injuries were deep wounds.

“But we noticed that cuts are not in front of the neck so she (Khadija) could say something as her vocal cords were not cut,” chief justice, however, observed.

Barrister Safdar also highlighted the lacunas left by investigation officer in the case saying that the permission for medico legal certificate was sought from magistrate and the impression was given that injured Khadija was taken to magistrate for the permission. He contended that it never happened and it was a clear misreading by high court.

He explained that permission from the magistrate for such certificate was not the practice and it had been practice that application was moved before the medical superintendent of the hospital and process starts.

Chief Justice Khosa observed that there must be some reason for permission and added that instead of taking blame on him the investigation officer went for extraordinary step.

“And no one asked the investigation officer in witness box as to why he did so,” Barrister Safdar contended. During the course of hearing, chief justice remarked that it was very unfortunate and this matter should have been decided in days rather than years.

The counsel again stated that the LHC judgment was passed in slipshod without perusing the evidence and hence it is the case of misreading. He further argued that nothing was done with the blood in the car by the investigation officer, adding that even the helmet of accused which was left in the car and sample hairs of accused attached within the cover of helmet had not been sent for examination and DNA instead the sample was misplaced.

The counsel responded that a driver was also not supposed to know the names of friends adding that the younger sister Sophia and driver identified the attacker at the time of pre-arrest bail and both told the investigation officer.  He explained that Hussain moved application of pre-arrest bail after being nominated in the case.

He further lamented that the sample of hairs were not sent to forensic lab. He observed that this was another serious lapse. He also remarked that the country had world’s second best state of the art forensic lab. “We are proud of it that we have such lab,” chief justice observed.

During the proceedings, the word ‘high profile case’ was used thrice. The chief justice expressed displeasure remarking what did that high profile case mean and whether the course of law changed for a high profile case. “Whether high profile or low profile, crime is crime,” chief justice observed.  Chief justice questioned if there was any suggestion that a third person would be interested in killing her. The counsel responded in negation and contended that his client had no hostility with anyone.

Chief justice also questioned why he would do this in such manner if he was interested in her. Barrister Safdar responded that it was the case of insisting and refusing subsequently turning into the episode.  “In such cases there are two conditions – one is if not mine then no one else’s and the other is that the girl might have something that can be used to blackmail the boy,” chief justice observed.

During the hearing, Barrister Safdar contended that prosecution brought home the guilt of the accused by proving its case to the hilt by producing confidence inspiring ocular account comprising as many as three witnesses, all of whom were present at the crime scene and produced in court.

“The ocular account is simply flawless and carried a very high degree of probative value. Not a single witness was held back and all three witnesses appeared in the court and subjected themselves to extensive cross-examination. Their credibility and presence at the spot could not be shaken at all,” he contended.

Justice Baqar inquired how long both had been in relationship. Chief justice remarked that the photographs were good enough to show once they were good friends adding that the greater number of injuries showed the greater provocation. The counsel responded that both remained in relationship for one year adding both were the law students.

The bench had also granted opportunity to Hussain, son of LHC’s prominent lawyer, for arguments for two minutes but he continued his contentions for more than 10 minutes.

Advocate Khalid Ranjha, appeared on behalf of Hussain, and contended that high court granted benefit of doubt. His defence, however, could not satisfy the bench. The bench was also not satisfied with the response of defence counsel and arguments of Hussain on why Khadija would substitute the real perpetrator with stranger.