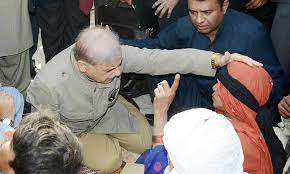 Posted by: admin in Gender Based Violence August 31, 2022 Comments Off on Rape victim’s family holds demo against police 19 Views

RAHIM YAR KHAN: Family members of a girl raped by a shopkeeper a month back protested on Wednesday against police outside the district press club for allegedly supporting the suspect.

Binyamin Masih and his wife, Nasreen Bibi, who were flanked by their relatives, told the journalists that on July 25, his daughter went to a nearby shop in Youhanabad for grocery.

The shopkeeper closed the shutter of his shop, made their daughter hostage and raped her.

When the girl started crying for help, the suspect escaped from the scene through the backdoor.

The victim’s parents filed a complaint with the Saddar Police Station but police did not register the case. Later, they moved the order and on the court order, police registered a first information report (FIR) under Section 511 (intent to commit crime) and Section 376 (rape) of the Pakistan Penal Code one month after the incident.

Police did not dispatch the DNA samples for laboratory tests, the girl’s father alleged. However, police did not arrest the suspect, he said and added that he had bribed the investigating officer (IO) who was the family for conciliation. He further claimed that his family was also facing threats of dire consequences.

Police spokesperson Saif Ali Wains told Dawn that police were not informed about rape. He said police would interrogate the case on merit; however, if the victim’s family had any grievances, it could approach the district police officer or SP investigation.