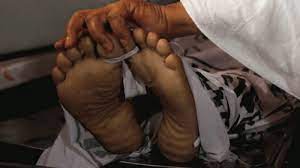 SAHIWAL: An expat Pakistani woman from Dubai was shot dead by her brother over a hereditary land dispute near grid station on Pakpattan Road in Arifwala here on Monday morning.

Reports said Fakhera Bibi (36) was on her way to Arifwala tehsil courts by a motorcycle-rickshaw for hearing of her hereditary land distribution case when her brother Shafiq Kamboh followed her and shot her dead. The suspect courted arrest and the Arifwala city police recovered a pistol from him.

Rescue 1122 shifted the body to the Arifwala tehsil headquarters hospital.

Police initial investigation showed Fakhera Bibi was a resident of Mohallah Iqbalnagar and after marriage, she shifted to Dubai and had been living there for long. After the death of her father, she filed a case for distribution of hereditary house and land against her brothers with tehsil court.

Fakhera was regularly pursuing the case by visiting from Dubai. Reports said her brother Shafiq Kamboh had been asking her to withdraw the case.

City Station House Officer Mr. Imran told Dawn by phone that two weeks back Fakhera came for attending a hearing of her case. On Monday, she was going to court when her brother killed her, he said. Further investigation is under way.