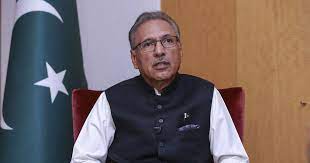 Posted by: admin in Women and Education 22 days ago 0 35 Views

Islamabad: President Dr Arif Alvi Monday while terming the country’s progress linked with education, called for society and Ulema’s role to promote girls’ education through awareness as well as providing them a secure environment.

The president, addressing the launching ceremony of Ulema-Ambassadors of Girls Education Campaign said the Ulema had never resisted the girls’ education as Islam was always its strong proponent.

He said the dropout rate of children in Pakistan was high which should be addressed by the government. He said in Pakistan, 32 per cent of primary students were out of schools comparing 21 per cent boys, 60 per cent girls above primary level were out of school comparing 50 per cent boys while only 13 per cent of girls reached class 9. He said in case of an insecure atmosphere, the parents would not even send their boys to schools, what to talk of the girls.

There could also be some opposition to co-education due to cultural traditions which should be resolved through the provision of separate facilities, he added. The president said with the increased awareness, the mind-set of giving more importance to boys’ education would also subside gradually.

Contrary to the notion, he said the Ulema also never opposed family planning. However, having their influence and outreach to the masses, the Ulema should highlight the importance of girls education, health issues like diabetes and obesity.

He said mosques had been and should remain the anchors of the Islamic society. He said the prayer leaders could also be sensitised on certain issues like the killing of Sri Lankan national Sialkot to raise their voice against extremist attitudes.

The president also lauded the idea of using the infrastructure of mosques without seminaries for school education in Punjab and KP where the prayer leaders were also getting stipends. He said besides faith, education was also equally important for the Muslims to excel in the world otherwise they would lag behind in the development.

However, he said in this modern era, it was also possible for the girls to get skill training while being at home, through the government had also introduced 50,000 higher education scholarships for both boys and girls.

In order to promote girls education at a lower level, the president said the government was giving Rs500 more stipend for girls’ enrolment in schools comparing the boys.

The president also lauded the role of Ulema for evolving a consensus on the anti-COVID SOPs which made Pakistan the first Muslim country to allow mosques open.

He said after their adult literacy, the women could be skill trained to make them an earning hand for their families and help them become productive citizens.

He said under the Ehsaas programme, the government was extending cash assistance to the women as they were considered to be more responsible and better handlers of the money.

He said there was no discrimination between men and women regarding education rather Islam was the first religion to empower women by granting them inheritance rights.

However, he said it was essential for the Muslims to abide by the basic principles of Islam to regain the lost grandeur.

President Alvi also mentioned the double standards of the West regarding women and refugees rights and said their morality was hypocritical. Earlier, Chairman of Council of Islamic Ideology Dr Qibla Ayaz said the campaign was being in collaboration with Pakistan Alliance for Girls Education (PAGE) which had already started the initiative through its Star Schools.

He said the daylong event was attended by the Ulema from Kohistan, Chilas, Diamer, South Punjab and Islamabad who pointed out the issues impeding the girls’ education and also suggested the solutions.

He said the proposals put forward by the participants would be presented to the president after compilation. He hoped that the Council would be able to take practical steps for the promotion of girls’ education in cooperation with the PAGE.

Executive Director of PAGE Dr Fajr Rabia Pasha highlighted the activities of the organization which was serving not only to promote quality education but was also investing in the teachers training.

Through multiple initiatives, the PAGE was creating opportunities for girls as their dropout rate was higher due to socio-economic or socio-religious reasons. She said the campaign would also help rectify the image of Pakistan as a progressive country that strongly advocated girls’ education.