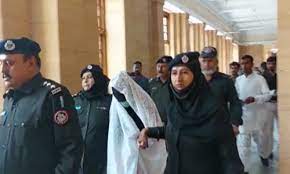 Plea for removal of IO in Dua kidnap case dismissed

Posted by: admin in In Focus July 4, 2022 Comments Off on Plea for removal of IO in Dua kidnap case dismissed 25 Views

KARACHI: A session’s court on Saturday dismissed an application of seeking removal of the ‘second’ investigating officer in the Dua Zehra abduction case.

The judge noted that the matter had travelled through different legal forums, including the Sindh High Court and the Supreme Court, which had passed different directives and orders and observations.

“To sum up there was no doubt in my mind to say that the learned Judicial Magistrate has not yet passed an order on ‘C’ class report filed by the investigating officer, which even otherwise will provide a room of appeal to the applicant, if the order in future is found adverse by him,” the judge observed.

The court said that the opinion of a medical board, which purportedly had initiated its proceedings, to determine the age of the girl was awaited.

“The prayer of the applicant for change of the Investigation/IO at this stage is not found justified for the reasons that the discord regarding the age of alleged abductee is pending with the Medical Board and the IO has no conceivable interference with the record/opinion of the Medical Board rendered in due course of time. Thus, the instant application is bereft of merits at this stage and is accordingly dismissed,” the judge ruled.

Syed Ali Mehdi Kazmi, the father of the girl, had moved the court, stating that despite Dua was produced before a medical board and knowing that her age was yet to be determined, the IO, Shaukat Ali Shahani, had filed final charge sheet insisting that “no case of kidnapping was made out”.

He alleged in the application that the IO was not investigating the matter properly and impartially. He approached police high-ups but they did not entertain his plea.

The court was pleaded to order the police high-ups to change the IO and entrust the case to some efficient police officer.

Last week, a judicial magistrate had ordered further investigation into the matter of Dua’s kidnapping and also directed the provincial health secretary to constitute a medical board to decide in a week her father’s plea for carrying out a fresh ossification test to determine her age.

Earlier, police had recommended cancellation of an FIR lodged by parents of Dua Zehra arguing that the claims about her kidnapping and being underage could not be proved after she denied the allegations before courts and an ossification test declared her age between 16 and 17 years.

The IO had argued that the provisions of the Section 364-A (kidnapping or abducting a person under the age of 14 years) of the Pakistan Penal Code as well as Sections 3/4 of the Sindh Child Marriage Restraint Act, 2013 were not applicable in the case since her purported marriage took place in Punjab.

The magistrate had already released 11 relatives of the groom against personal bonds, while the IO also recommended to discharge cleric Hafiz Mustafa and witness Ali Asghar from the case, saying they were found innocent in investigation.