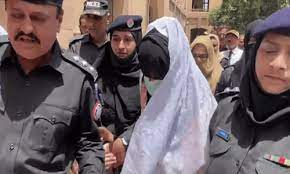 Posted by: admin in Miscellaneous News October 9, 2022 Comments Off on Parents of girl whose child marriage was solemnised in Punjab move court for her custody 34 Views

The parents of a minor girl who was allegedly kidnapped and trafficked to Punjab where her illegal child marriage was solemnised have moved a civil court seeking visitation rights and permanent custody of their daughter who has been residing at a shelter home since being brought to Karachi.

Syed Mehdi Kazmi and Saima Kazmi filed separate applications seeking the permanent custody of the girl under the Section 25 of the Guardian and Wards Act 1890 and visitation rights to meet her until the case for her custody was decided under the Section 12 of the Act.

The applicants, through their lawyer Jibran Nasir, stated that they were the natural parents of the minor who had been temporarily sent to the shelter home where she would reside until the case pertaining to her alleged kidnapping and underage marriage was decided.

They said the girl was 14 years old as per her birth and educational certificates and had been residing with them until April 24 when she was allegedly abducted. Later, she surfaced in Lahore where she was said to have married the accused, Zaheer, despite being under 14 years. On July 19, the applicants said, Zaheer fearing his arrest abandoned their daughter who then appeared before a judicial magistrate in Lahore and stated that she wished to be sent to a shelter home. The girl was then shifted to the shelter home in Karachi on the directives of a judicial magistrate.

The counsel for the applicants said that the victim was unsafe and vulnerable to manipulation by Zaheer who was now out on bail. “The minor needs to be protected by her natural parents i.e. the applicants and it is in her best interest and welfare that her custody be permanently handed over to the applicant,” he argued and added that her alleged abduction by the respondent had deprived her of safety and education.

“The minor needs a protected shelter, proper food, clothing, a social circle of friends and siblings, the love of her parents and education in order to grow into a healthy human being, which is only possible if her custody is handed over to them,” the counsel said.

The court was requested to hand her custody over to the parents permanently and allow them to meet their daughter at the shelter home until their application for the permanent custody was decided.

Meanwhile, Zaheer’s lawyer filed objections to the applications arguing that they were non-maintainable and liable to dismissed for they had been submitted before the civil judge having the jurisdiction of the Al-Falah police station but the shelter home was located within the Quaidabad police’s remits.

After the initial hearing, the civil judge (East) issued a notice to the respondents – Zaheer and shelter home officials – to advance their arguments on the applications. The case was adjourned until October 21.