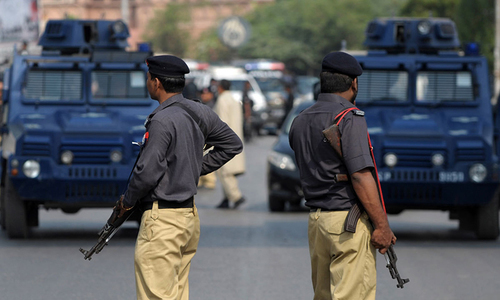 Need stressed for sensitising police to deal with anti-women crimes

KARACHI: A consultative meeting on the Sindh Comprehensive Acid and Burn Crime Bill 2019 has brought up several issues standing in the way of the law’s coming into action.

“There have been so many great pro-women laws that were passed by the Sindh Assembly but they couldn’t be implemented due to things such as lack of trained human resource or lack of a redressal system. The component of funding in legislation also goes against these laws and acts,” said Sindh Commission on the Status of Women (SCSW) chairperson Nuzhat Shirin.

The event was organised by the Acid Survivors Foundation Pakistan (ASFP) in partnership with Group Development Pakistan and the SCSW at a local hotel on Wednesday.

She said that the real implementation bodies in the instance of crimes against women were police stations. “The police need training and sensitising in order to deal with the complaints of people. There are NGOs trying to educate them but then they also keep getting transferred and the NGOs have to start all over again,” she pointed out.

Pakistan Tehreek-i-Insaf MPA Adeeba Hasan said that they definitely needed NGOs to help guide and support not just police personnel but also those in the government and in the provincial assembly.

“NGOs are always needed to tell us where we are going wrong and what is needed. And it is true that the process of releasing funds from these sources is so long that by the time the money to be released gets okayed the patient dies,” she said.

Rana Ansar, a Muttahida Qaumi Movement-Pakistan MPA, was of the view that there was a need to check budget allocations.

“A clause should be mentioned on how to utilise the funds,” she said. “We need to move a resolution for establishment of more burn centres.”

She also said that often a seriously injured person might die before the police reached the spot. “Therefore, it is extremely important that the person’s statement should be taken by a guardian under the supervision of a medical officer.”

Police surgeon Dr Qarrar Abbasi said that the Jinnah Postgraduate Medical Centre had space where they could make a burn and plastic surgery centre.

Lawyer and human rights activist Ali Palh said there should be a special fund for disabled persons too, as there were disabled acid victims as well.

ASFP chairperson Valerie Khan Yusufzai, meanwhile, observed that effort against acid and burn violence was a success story in Pakistan as it happened to be the only form of gender-based violence that had decreased by 50 per cent in 10 years. “Still, resource management is important,” she said.

Transgender activist Bindiya Rana said that funds needed to cover all expenses such as food, shelter, travelling expenses, legal aid for the victims. She also pointed out that police stations needed to have photocopiers and power generators.

She also noticed that funds for women in distress mentioned that they would be used for female acid crime survivors and not for males, transgenders and children. “But where [should] they go for their rehabilitation and medical treatment if they are the victims?” she asked.

Later, a letter of cooperation was signed for the purpose of strengthening the collaboration between the SCSW and ASFP to contribute towards reducing acid crimes and acid violence in the province, to monitor the implementation of the relevant law and to achieve the enactment of the Sindh Comprehensive Acid and Burn Crime Bill.