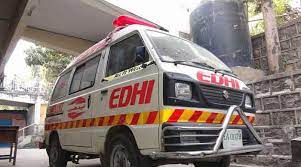 Mother of nine stabbed to death by husband

In yet another incident of violence against a woman, a mother of nine was stabbed to death allegedly by her husband at their house in Karachi’s Korangi neighbourhood on Tuesday. The Korangi police said that the incident took place in a squatter settlement within their jurisdiction. They said that the woman’s body was taken to the Jinnah Postgraduate Medical Centre for a post-mortem examination.

She was identified as 45-year-old Nasreen, wife of Mian Muhammad. Citing the initial investigation, the police said that the victim’s husband might be behind the incident. They said that the man might have stabbed his wife to death during an argument. The woman was a mother of nine, while her husband is a laborer, they added.