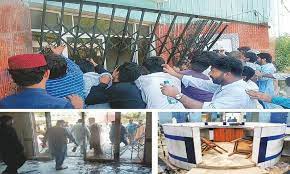 Posted by: admin in Gender Based Violence September 26, 2022 Comments Off on Mob goes on rampage after teenage girl’s death at Chandka Medical College Hospital 32 Views

LARKANA-A large number of enraged relatives of a teenage patient went on the rampage at the Chandka Medical College Hospital (CMCH) causing extensive damage to the equipment, furniture and fixtures, besides manhandling a doctor and causing injuries to several staffers over her death during treatment.

The patient, Paras Umrani, 16, a resident of Moor Umrani village located near Dakhan town, was brought to the hospital’s emergency ward in the early hours of the day. She was bitten by a snake. She was provided treatment but she could not survive.

Her relatives present in the hospital believed that the duty doctor and other staff delayed the treatment which caused her death. They misbehaved with the staff and held a noisy demonstration outside the hospital. Other relatives and more people from their village joined them in the protest and finally they stormed their way into the administration block after pulled down its iron grill. They then went on the rampage and manhandled the duty doctor, Dr Junaid Sandano. Several staffers and other people present inside were injured when they smashed the glass doors, windows and panes allegedly with blunt objects.

Overwhelmed by grief and anger, the intruders broke into the office of the Medical Superintendent Dr Gulzar Tunio and misbehaved with him.

Speaking to Dr Tunio said that the enraged relatives carrying the body of the deceased had started their protest by holding a sit-in on the main VIP Road. Raising slogans against doctors, they were demanding registration of a murder FIR into the incident. Contending the allegation that the treatment was delayed, Dr Tunio said that when the patient was brought here first, the duty doctor had advised them to wait for certain tests before she could be administered the anti-snake-bite venom (ASV). But they took away the patient. When they returned to hospital, the patient’s condition had turned critical, he said, adding that the duty doctor and other staff administered the ASV and provide other treatment but she died.

“When the protesters stormed their way into the administration block, I tried to contact the district administration and police but without any response. Only Larkana commissioner responded,” the MS said. Later, the matter was conveyed to the high-ups in the health department as situation grew serious, he added.

The doctors and paramedics suspended their work at the casualty for some time but resumed their duties after a heavy police posse was deployed to restore the services, sources at the hospital said.

In his ‘incident report’ sent to the health secretary, MS Tunio said the patient was brought in the hospital where duty doctors provided emergency cover including the ASV.

“The attendants in a fit of anger took away the patient against medical advice when asked to reduce the rush,” he said. After two hours, they again brought the patient but she was in a critical condition and doctors tried to resuscitate but patient could not survive, he said.

“After few hours, a huge terrorising mob with guns, pistols, and lathis attacked the MS office when he [MS] was conducting a meeting on the incident,” the report said. They broke the iron grill, aluminum doors and windows, which caused injuries to staffers. They damaged furniture, air conditioners, computer, and laptop and torn up the official record the MS, it added.

Meanwhile Moazzam Ali Abbasi, a former GDA MPA from Larkana, joined the protesters, who were led by Inayat Umrani, a leader of PPP-Shaheed Bhutto.

Umrani accused the hospital administration of not providing proper treatment. The ex-MPA spoke to the media and criticised PPP government for poor health facilities available at hospitals. He demanded an inquiry into the incident.

It was reported late in the evening that in the presence of Mr Abbasi, Inayat Umrani called off the protest when SSP Asif Raza Baloch told him that the home department was requested to order a judicial inquiry into the incident.