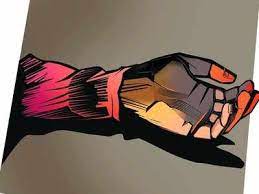 A minor girl was allegedly poisoned to death in Korangi on Tuesday. Her mother Shahzadi claimed that she was not at home when the incident took place. She claimed that a male guest, Asghar, who had arrived from Balochistan, was present at the house at the time of incident, and he had poisoned three-year-old Ayesha to death. The man fled the scene after committing the crime. Police had collected food samples from the house and sent them to a laboratory for an examination.