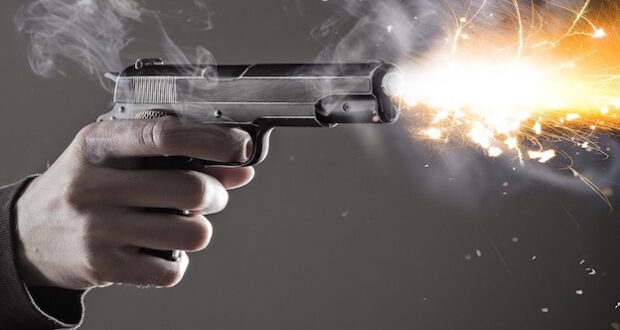 Posted by: admin in Domestic Violence 17 days ago Comments Off on Man shoots wife, nephew dead over ‘affair’ in Baldia Town 35 Views

A man allegedly gunned down his wife and a nephew at his house on suspicion they were having an affair in Baldia Town’s Raees Goth in the wee hours of Thursday.

SHO Chaudhry Shahid of the Mochko police station said that responding to information, a police mobile on patrol rushed to the house, where locals told the cops that the suspect was trying to flee.

The police, with the help of rescue teams, took critically wounded Rustam Sher, 23, and 25-year-old Momil, wife of Ali Khan, to hospital, where they died. After a chase, the cops caught Ali Khan with a pistol and moved him to the police station. During the initial interrogation, the suspect said he had married Momil some eight years ago in his hometown in Jaffarabad, and they later moved to Karachi’s Raees Goth.

During the wedlock, Momil gave birth to five children — two daughters and three sons — while her husband sold vegetables in the area to earn a livelihood. The suspect said that a few months ago his nephew Rustam had started living with them and he had suspicion that he had some illicit relations with his wife. Late on Wednesday night, he said, he went to his house secretly and found his wife and nephew in a compromising position. Enraged by what he had seen, Khan said, he took out his pistol and shot them.

SHO Shahid said they had seized the murder weapon and sent it to the forensic division of the Sindh Police. A case has been registered and investigations are underway.