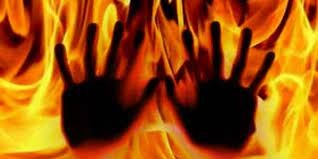 PESHAWAR: A local court on Friday sent a man to prison on remand on the charge of burning his newlywed wife to death in Akbarpura area.

Suspect Shahabuddin was produced before a judicial magistrate by the police’s investigation officer on the completion of his one-day physical remand.

The court ordered his production on May 13.

The suspect, a tailor by profession, was named in an FIR registered by the Akbarpura police station on April 25 on the complaint of the woman’s uncle, Islam Gul.

A sister and niece of the suspect were also named in the FIR. They are at large.

Initially, the FIR was registered under Section 336-B (harm by use of corrosive substance) of the Pakistan Penal Code. However, the woman’s death in hospital led to the inclusion of PPC Section 302 in it by investigation officer Umar Farooq.

His sister, niece named in FIR are at large

The investigation officer told Dawn that the fugitive was held by the police on Apr 28 after hectic efforts.

He said the suspect was remanded in the police’s custody by the court for a single day on Thursday.

Mr Farooq said the two women accused neither secured pre-arrest bail nor did they surrender to the police, so the search for them was under way.

Complainant Islam Gul told Dawn that the family wanted justice as his niece, Muneeba, was killed in a brutal manner.

He said the deceased was around 20 years of age and had four sisters and a brother.

The complainant said the deceased was married to Shahabuddin around six months ago and the latter used to quarrel with her on petty issues.

He said on the day of the woman’s murder, he found her in his house on return from work and learned that she had left her husband’s house over a domestic issue.

Islam Gul added that the he convinced his niece to return.

He added that at night, he received a telephonic call from the suspect, who claimed that his wife had sprinkled kerosene oil on herself before setting herself on fire.

“I rushed to their residence and found Muneeba badly burnt. I took her to the Lady Reading Hospital, whose doctors referred her to the burns centre at the Hayatabad Medical Complex,” he said.

The complainant said initially, the police waited for the woman to gain consciousness to record her statement but she died of critical injuries.

He said he and other family members were certain that she didn’t commit suicide and instead, she was killed by her husband with the help of his sister and niece.

Islam Gul said he belonged to a poor family and Muneeba’s father worked at a local bulb manufacturing factory.

“We don’t have resources to pursue the case in the court of law, so the government should provide us with the required legal and financial assistance,” he said.