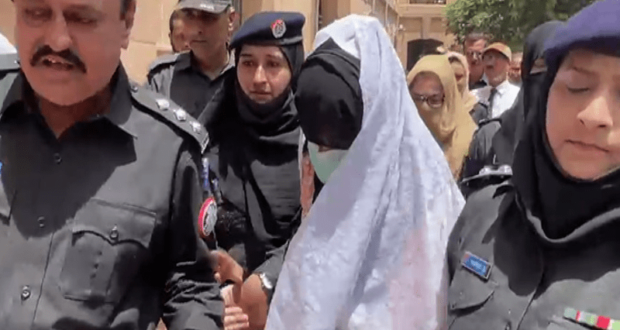 Posted by: admin in In Focus July 23, 2022 Comments Off on Magistrate orders investigating officer (IO) to produce Dua Zehra in court on Aug 1 57 Views

KARACHI: A court on Friday directed the investigating officer to produce teenage Dua Zehra from the Darul Aman in Lahore, where she took shelter.

On July 19, a judicial magistrate in Lahore had sent the teenage girl to a shelter home on her request after a fresh investigation had revealed that Zaheer Ahmed had allegedly kidnapped her from Karachi and later illegally solemnised child marriage with her in Punjab.

On Friday, the girl’s mother, Saima Kazmi, moved an application before Judicial Magistrate (East) Aftab Ahmed Bughio pleading to order the police to recover her minor daughter from the Lahore’s shelter home and put under the protection of any child protection institute.

While allowing the application, the judge directed the IO to produce the girl duly accompanied by a child protection officer on Aug 1 “without fail”.

The IO was also told to submit a final charge sheet on the next date so that the matter pertaining to her alleged abduction and underage marriage could be proceeded accordingly.

“It is very much clear that in the case when confidential information is brought by any person acting in benefit of the minor that an offence with regard to the Child Marriage Restraint Act is committed, the court has to ensure her or his production for protecting her/him from being victimised,” the order said.

The magistrate mentioned that the Sindh High Court had in this regard clearly issued directions to the IO for shifting the victim/witness from Lahore to Karachi and the production of the minor before the court for further orders for custody and protection of minor/victim and disposal of the case.

Earlier, the applicant’s counsel argued that under Rule 9 of the Sindh Child Marriage Restraint Rules, 2016 the incumbent court having jurisdiction of the police station where the minor’s kidnapping was reported on the application of a person, who is acting in the interest of the child, may pass an order for production of the minor in case where it appears to the court that the offence under the Child Marriage Protection Act, 2013 is committed or is likely to be committed.

He pleaded the court to issue the writ for production of the victim/minor Dua Zehra under this Rule.

The counsel claimed that strange people were seeking permission to meet Dua in Darul Aman at Lahore, which, he apprehended, may prejudice and create the possibility of her being pressurised.