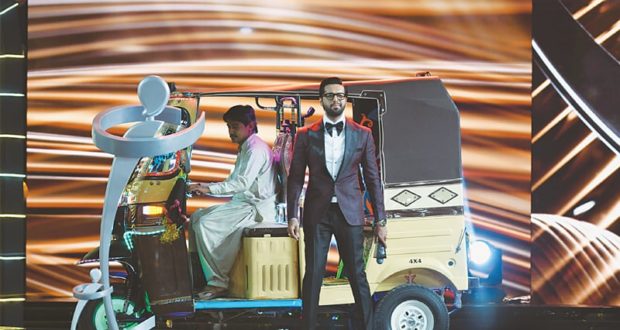 KARACHI: How could we have known that when the late diva Aretha Franklin sang the iconic R-E-S-P-E-C-T over half a century ago, it would lead to the perfect girl anthem to open the 18th Lux Style Awards that were held on Sunday night at the Expo Centre, given the mood of the evening where the audience were fed a staple diet of girl power, changing perspectives and an overall celebration of womanhood in its various forms.

But then, there were also those in the audience who wondered whether the effort was in stark reaction to a controversy regarding the inclusion of a certain alleged ‘persona non-grata’ within the nominees or simply a genuine overnight ‘awakening’ and a realisation that the LSAs need to recognise and ‘do more’ to curb harassment and the ill-treatment of the fair sex.

Whatever the reasons, let’s not get into that and focus on the ceremony instead that began somewhat timely and at a decent hour but went on for over five hours and well past the stroke of midnight, punctuated by some impressive and not-so-impressive performances, faux pas, bloopers and a few awkward moments, besides inspiring tributes and segments that incited a change from the status quo.

Above all, the LSA statuettes were given out to the men and women of the showbiz and fashion fraternity with a nod and acceptance of a job well done over the previous year. The toast or darlings of the evening were clearly Meera-ji and Saba Qamar. While the former plays a titular and pivotal role in the Saqib Malik film Baaji that was released earlier in June, Ms Qamar had stayed away from earlier such ceremonies and only announced her comeback by becoming the newest ‘Lux Girl’.

There were others of course, including yesteryear film actress Jharna aka Shabnam who was flown in all the way from Dhaka for the ceremony and paid tribute by the younger generation of stars with flashback performances remixed by Sahir Ali Bagga, and conferred the Chairman Unilever Lifetime Achievement Award during the ceremony. Veteran actor Nadeem was also feted.

After a live rendition of Pakistan’s national anthem on traditional instruments by the band Grehan, Unilever Pakistan head Shazia Syed, in her opening address, noted that the LSAs have also contributed to the winds of change that have swept over the country in their own way, and that we have to “un-stereotype” behaviour and bring about diversity.

The choice of hosts for the ceremony ranged from Fahad Mustafa to Saba Qamar, Yasir Hussain to Masha Pasha to Ahmed Ali Akbar and even Ali Safina. While some scored, such as Ahmed Ali Butt, others didn’t fare so well due to a somewhat lacklustre script and general lack of pizzazz and goof-ups. Of the segments, the memoriam to all the stars we have lost over the past year was most emotionally stirring.

The LSA trophies given out for excellence in various fields include:

Song of the Year: ‘Ya Qurban’ by Khumariyaan