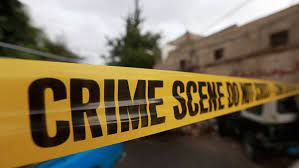 VEHARI: A man allegedly killed his wife and a man for “honour” in Jallah Jeem area in Mailsi Saddar police limits, some 45km from here, on Friday.

As per police, the suspect, a local labourer, Gulam Yaseen, allegedly found his wife Nadia (34), a mother of four, with a man, Allah Ditta (35), when he entered his house.

In a fit of rage, Yaseen attacked them with a cleaver, inflicting critical injuries. As a result, both of them died on the spot.

Station House Officer (SHO) Naveed Warraich said that after committing the double-murder, the suspect surrendered himself to police with the weapon used in the crime.

He said a case had been registered against the suspect and the bodies were shifted to the tehsil headquarters hospital for their autopsies.