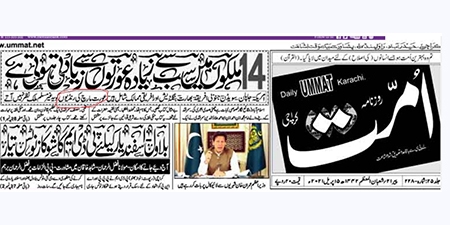 KARACHI: The journalist organisations and Human Rights Commission of Pakistan have strongly condemned the unethical and inappropriate content published against women by a local Urdu daily published from Karachi.

The Pakistan Federal Union of Journalists (PFUJ) and the Karachi Union of Journalists (KUJ) on Monday condemned the uncalled-for and unethical attack on women by a local Urdu daily. The PFUJ strongly condemned the uncalled for immoral and unethical attack on women published on the front page of the daily and termed it violative of all the principles and ethics of journalism.

In a joint statement, President PFUJ Shahzada Zulfiqar and Secretary General Nasir Zaidi said that never in the history of Pakistan’s journalism, such strong words against any segment of the society had ever been used. It seems that the daily newspaper is being used to fulfil the agenda of extremists who do not want to see women contributing in the development of the society and country.

The PFUJ urged the All Pakistan Newspaper Society to take immediate and appropriate actions against the management of the Urdu daily. Similarly, the Karachi Union of Journalists has strongly criticised the Urdu language daily for unsavoury remarks published on its front page against women and described it against the journalistic principles and ethics.

KUJ’s President Ejaz Ahmad, Vice President Lubna Jarar, Secretary General Ajiz Jamali, Treasurer Yasir Mahmood, Joint Secretaries Rafique Baloch, Talha Hashmi and members of the Executive Committee, criticsing the content published in the Urdu daily, said such uncalled-for language does not fall under the freedom of expression and independence of the media. Neither Islam, nor the principles of journalism and the media ethics allow employing obnoxious language against any segment of the society. The editorial policies of any newspaper have similarly never entertained such a content. In its statement, the KUJ feared such unsavoury content could lead to chaos in the society. The KUJ demanded the Sindh government to take seek an explanation from the newspaper and take action against it. It demanded from the editor and publishers of the newspaper to tender an apology from women over the issue.

In a related development, the Human Rights Commission of Pakistan condemned the use of unethical and inappropriate language against women in a local Urdu daily. The newspaper must publish an unconditional apology and refrain from using such language in future. This is the same newspaper that is orchestrating a vilification campaign against leading elderly writer Amar Jaleel. Describing that such practices bring a bad name to the profession of journalism, the HRCP asked the APNS and CPNE to take action against their member publication.

Share0Pin0Tweet0LinkedIn0Email0
2021-04-06
admin
Previous: ‘Women’s rape must not be linked with their way of dressing’
Next: Man kills sister-in-law, servant at home