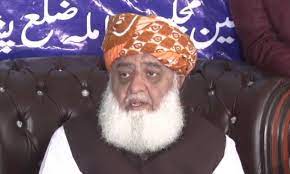 MANSEHRA: The opposition Jamiat Ulema-i-Islam-Fazl has decided to hold a meeting of all religious parties against the proposed laws on domestic violence and evacuee land declaring them against Islamic injunctions.

He said his party’s chief, Maulana Fazlur Rehman, would announce the schedule of nationwide public meetings and rallies.

“I met Maulana Fazlur Rehman the other day, who asked me to get ready for street protests against the proposed legislation on domestic violence and evacuee land,” he said.

The JUI-F leader said religious parties won’t allow the government to seize the lands and buildings of mosques and seminaries as the legislation proposed for the purpose was meant to control them.

He claimed that the PTI government was under tremendous pressure by the International Monetary Fund and Financial Action Task Force to take steps, which would harm Islam and national interests.