Latest News
Home / Featured / Harassment should be treated as a crime: HRCP

Harassment should be treated as a crime: HRCP

He was speaking at a consultation on ‘Sexual harassment law and its implementation’ organised by the HRCP at a local hotel on Saturday.

“Efforts have to be taken to promote the idea of dignity of person. The law on harassment at workplace should be made more effective. If a patient is harassed by the doctor, the law will not be applicable there because it is for the employee and the employer,” Mr Rehman said.

Experts call for amendment to law on harassment

Senator Farhatullah Babar said he had submitted a bill to the parliament to bring an amendment to the Act of Harassment at Workplace 2010 which is being discussed by the standing committee concerned.

“Input is also being taken from non-governmental organisations and human rights activists and it is under consideration that hospitals, organisations and institutions should also be brought under the amended law,” he said.

Legal expert Babar Sattar said the law on sexual harassment was weak as compared to the one India promulgated in 2013.

“The law in Pakistan, which was promulgated in 2010, does not effectively deal with houses and other places. The nature of offences is civil due to which if a person is proved guilty, the maximum punishment for him is to terminate him from service.”

He said an FIR should be registered against the suspect.

“There should be only one person from the organisation in the harassment committee and others should be neutral,” he suggested.

“If a complainant is not satisfied with the decision of the committee, he/she can file a complaint with the HEC,” he said.

Human rights activist Bushra Khaliq said the law was simple but no one bothered to implement it.

Civil society activist Professor Farkhanda Aurangzeb said there were some cases in which students tried to blackmail their teachers by accusing them of harassment.

QAU in the limelight

The participants discussed the case of an officer of the QAU who was forcefully retired by the university syndicate for harassing a student. His appeal was also rejected by the ombudsman but the then president of Pakistan reinstated him after seeking legal opinion from the ministry of law and justice.

Senator Farhatullah Babar, who is also a member of the QAU syndicate, said the QAU officer was sent on forced retirement. He initially filed an appeal with the office of the ombudsman but his appeal was rejected.

“Then, the officer appealed to the then President Asif Ali Zardari who sought opinion from the ministry of law. The ministry opined that the Act of Harassment at Work Place 2010 was not applicable on students of educational institution because it dealt with the employee and employer,” he said.

Senator Babar said after the incident he filed an amended bill with the parliament to also include educational institutions in the Act. 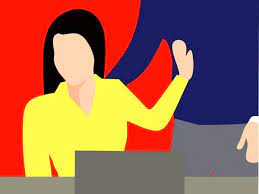