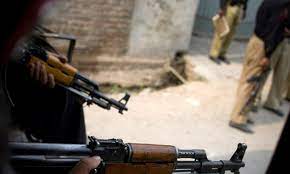 BAJAUR: A woman was killed and a child injured when unidentified assailants opened fire in Khar town of Bajaur tribal district here on Saturday.

Rescuers took the woman and child to the District Headquarters Hospital, Khar, where doctors declared the woman dead.

Sources said the woman belonging to Lower Dir had been living in Bajaur for last two years after marrying of her choice. They said the victim’s husband was also shot dead by someone in Karachi a few days ago. A police official said they had registered a case and efforts were on to arrest the attackers.

Meanwhile, Sher Bahadar, the father of the wounded child identified as Ikramullah, demanded of the authorities to arrest the attackers.