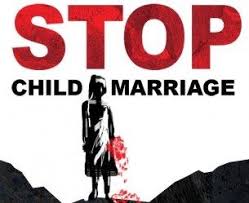 PESHAWAR: The civil society organisations and human right activists have urged the Khyber Pakhtunkhwa government to table and pass the pending legislation of Child Marriage Restraint Amendment Bill, 2018 and raise the minimum age of marriage to 18 without any delay.

Speaking at a joint press conference at Peshawar Press Club, they highly appreciated the landmark step of the Saudi’s Shura Council setting the best example and making it an illegal for girls’ under15 years to get married. They said according to media sources Saudi Arabia’s Shura Council, the top advisory body to the government, in a remarkable move has approved with the majority regulations for banning the marriage in Saudi Arabia under the age of 15 and proposed to increase the minimum age of marriage to 18 for girls and boys. According to a UNICEF report, they said 3 percent of girls in Pakistan were married before they turn 15 and 21 percent before the age of 18. They said the recent research ‘Demographics of child marriages in Pakistan’ (WHO), states that mostly child marriages are in practice in rural areas than in urban areas and more than 140 million girls will marry between 2011 and 2020. According to the recent “Health and Demographic Survey of Pakistan 2017 -2018 almost15 percent of child brides in KP gave birth to their first child before 18 years of age.

Qamar Naseem, Programme Coordinator, Blue Veins and Coordinator for Provincial Alliance to End Child Marriages, appreciated the decision of Saudi Shura Council and said that “proposing the raise in age of marriage to 18 is a great step forward and sets a revolutionary example for other Muslim countries that have not banned child marriage yet.” He said that early and forced marriage violated human rights as well as the sanctity of marriage and family in Islam.

“It is time to open up dialogue on the role of faith and religion in protecting the rights of girls and women and how faith can help prevent a child, early and forced marriages,” he added. Valerie Khan, Chairperson, Group Development Pakistan and a prominent child rights activist, said the child marriage was a harmful practice and had destructive effects on physical and mental health of contracting parties.

“The child marriage does not only violate their rights once but the consequences last a lifetime,” she explained, adding that especially for a girl who is more likely to face challenges as she is expected to be ready to bear several domestic responsibilities along with childbearing. Imran Takar, a child rights activist, said that Pakistan was among the states that proposed a target to end child marriage by 2030 in discussions of the Open Working Group on the Sustainable Development Goals. Taimur Kamal, Coordinator, Khyber Pakhtunkhwa Civil Society Network said that child marriage damaging countries’ economies, social and economic development and leads to a cycle of poverty in generations.

The News: Child marriage and the law

Share0Pin0Tweet0LinkedIn0Email0
2019-01-16
admin
Previous: Inspection team asked to file report on rape cases pending in Sindh courts
Next: Women’s seat to be reserved from Islamabad in NA