Posted by: Fatimah Hassan in Honour Killings 6 days ago Comments Off on Girl’s ‘honor’ killing at City Courts does not attract terror charge, rules ATC 5 Views

An anti-terrorism court on Tuesday declined the investigating officer’s request for grant of physical remand of a man arrested for allegedly murdering his young daughter in the name of honour.

Ameer Jan Mehsud has been booked for allegedly shooting to death his 19-year-old daughter Hajira and wounding Head Constable Imran Zaman and passer-by Wajid Kaleem on the premises of the City Courts on Monday.

The victim, who is said to have contracted a free-will marriage with a doctor, had been brought to the judicial complex so she could be presented before a judicial magistrate to record her statement.

The investigating officer produced the held suspect before the administrative judge of the anti-terrorism courts and requested his two-week physical remand in police custody for the completion of the investigation and other legal formalities, including the criminal record office (CRO).

The judge observed that the terror charge was not attracted in the present case. “Perusal of record shows that accused had no any intention to create terror. Thus, this court has no jurisdiction to grant the remand,” he said, directing the IO to seek the man’s police remand from the court having jurisdiction.

A case was registered against the man under sections 302 (premeditated murder), 324 (attempted murder) and 353 (assault or criminal force to deter public servant from discharge of his duty) of the Pakistan Penal Code (PPC) read with Section 7 (punishment for act of terrorism) of the Anti-Terrorism Act at the City Courts police station. A separate case was lodged over possession of an unlicenced pistol.

Hajira had left her residence to marry a man of her own free-will, according to the police. Her father had lodged a case under Section 365-B (kidnapping woman to compel for marriage) of the PPC against her purported husband. The police recovered the teenage girl and brought her to the City Courts to record her statement before the relevant magistrate when her father shot her dead. 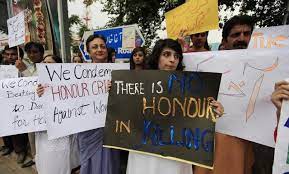