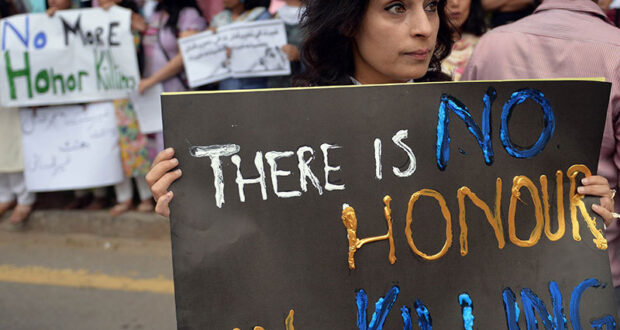 Posted by: admin in Honour Killings 13 days ago 0 41 Views

LAHORE: A young girl was allegedly shot dead by her brother in the name of honour in Sattokatla while another was injured by her cousin in Kahna area here on Thursday.

In Sattokatla, the deceased girl (M) was 17 years old and she had reportedly eloped with a man of the same area.

A police official said the family and elderly people assured her of marriage with the man and asked her to come back home.

He said as the girl reached home, her brother Mohsin allegedly shot at and killed her and fled the scene with his weapon.

To a question, he said, it was yet to be ascertained whether her father was involved in the murder plan or not.

Police have registered a case against the suspect and shifted the body for autopsy.

About the Kahna incident, he said, the girl, a resident of Kasur, had arrived Lahore along with her cousin to see her relatives.

Meanwhile, both exchanged hot words over a family matter, he said adding that the girl’s cousin Ali Ahmad attacked her with a blade.

The girl jumped out of the car when its speed slowed on Ferozpur Road due to traffic blockade while the attacker managed his escape.

The police shifted the girl to hospital where her condition was stated to be stable.

He said action would be taken on receiving complaint from the victim girl or her family.