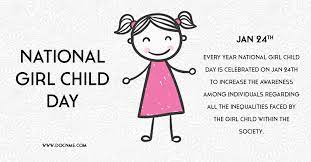 Islamabad: Girls need to be given more importance and be treated equal to their male counterparts from birth so that they can grow up as strong and confident individuals who can take charge of their own lives and contribute towards the development of society, said the NCRC Chairperson Afshan Tehseen in her message on the International Day of the Girl child.

Each year, the International community celebrates Girl Child day on 11th October with a theme. This year’s theme is ‘Our time is now—our rights, our future’. The day is celebrated to recognise the importance of girls and raise awareness of the issue’s girl’s faces every day. It is also a day to celebrate the strength and achievements of girls. The world has come a long way in terms of equality for girls and women, but there are still many inequalities. The National Commission on the Rights of Child is working on to promote and protect the rights of children in Pakistan however to commemorate this day, the NCRC has launched a week-long awareness campaign focused on child marriages, said a statement issued by the Commission on the international day.

The Chairperson in the statement said that the Commission is concerned about the persistent practice of child marriage throughout the country. Pakistan has the six highest number of women married before the age of 18 in the world. According to the PDS 2017-18, 18.3% of girls under 18 are married. It mentions that the NCRC recently organised provincial consultation in Karachi for the implementation of Sindh Child Marriage Restraint Act -2013 with the purpose to discuss the legal and operational gaps in the implementation of Sindh Child Marriage Restraint Act-2013 & Rules 2016 and suggest way forward. The commission will work with concerned departments and civil society to address such issues and gaps.

Moreover, on the occasion of International Girl Child Day, NCRC strongly recommends bringing uniformity in the law of Child Marriage Restraint Act across Pakistan and to rise the marriage age for girls 16 to 18 years in KP, Punjab, Balochistan and ICT. The statement said that it is also important for communities to understand the value of education and parents need to be aware to look for the better future of their daughters through education and skills.

The NCRC recommends that the girl child should be empowered by giving them their right to education and health in a safe environment. The fruitful results will only happen with the collective efforts at all levels in society and creating awareness amongst the masses. The Federal Government has constituted the National Commission on the Rights of Child in exercise of powers conferred by Section 3(1) of the National Commission on the Rights of Child Act, 2017 (XXXII of 2017) under a notification issued on February 28, 2020. The Commission has an overarching mandate in accordance with international obligations and for matters related to the promotion, protection and fulfilment of child rights as enshrined in the NCRC Act 2017.

2022-10-11
admin
Previous: Woman killed by husband
Next: Five days on, police yet to trace missing schoolgirl