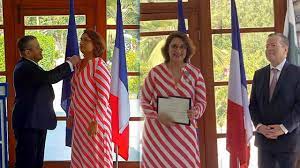 According to the details, French Ambassador to Pakistan, Nicolas Galey, presented the award to Shah on Thursday at a French cultural center, Alliance Francaise, in Karachi.

Taking to Twitter, French Embassy in Pakistan said that the honor has been given in recognition of her abilities as a writer and journalist, along with her contribution to women’s rights, and her passion for the French language and culture.

At the award ceremony, Shah said that she began learning the French language when she was only 12 years old and then moved to the US for her education.

Later, she became involved with Karachi’s Alliance Francaise after she returned to Pakistan in 1995.

In her career as an author, Shah has written five novels with the latest one, a feminist dystopian story, Before She Sleeps, which was published in 2018. Its sequel, The Monsoon War, will be released in May next year.

Besides, she also writes for the New York Times and Dawn, while her literary work, which includes both fiction and non-fiction, has often received global recognition.

2022-10-16
admin
Previous: ‘Rights of women in Balochistan to be safeguarded’
Next: Five women kidnapped