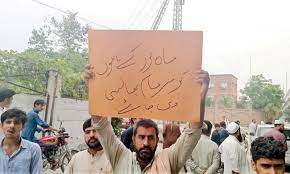 Posted by: admin in Gender Based Violence July 5, 2022 Comments Off on Family protests as girl’s body found in Peshawar 54 Views

PESHAWAR: A minor girl, who had gone out of her home on some errand, was found murdered in the Railway Colony area of the provincial capital on Sunday evening.

Father of the girl, 11, told the East Cantonment police that they started search for her when she did not return home after she went out to purchase something from a nearby shop.

Later, he said they found her half-naked body stuffed in a sack from a corner of the Railway Colony. He said the body bore a wound on head, adding she was strangulated with a piece of cloth.

He said the family had no enmity with anyone.

Meanwhile, the police shifted the body to a hospital for postmortem.

Meanwhile, the area residents and family members took the minor’s body to the Peshawar Press Club, where they placed it on the road and staged a protest to press for arrest of the murderer(s). The protesters dispersed after police assurance that the culprits would be arrested soon

2022-07-05
admin
Previous: Saddar police booked two men for raping a woman on pretext of dropping her home when she was waiting for a rickshaw at Mohal Chowk.
Next: Man, woman shot dead for honor in Charsadda